You are here: HomenextExhibitionsnextBuildingsnextListed buildings and local listnextZena Dickinson - A Lifetime of Service at Luton Hoo

Zena Dickinson - A Lifetime of Service at Luton Hoo

After working 35 years at Luton Hoo, from 1985 to 2020 when the pandemic arrived, I made the decision to retire at 75 years old and to start writing a book.

When the Pandemic descended in March 2019 I was still working at Luton Hoo although only part-time. I intended to remain there definitely through to Easter 2020 to achieve a personal anniversary of 35 years involvement on the Estate. However the Pandemic changed my situation – at first just by having to self-isolate because of my age (then 74) plus being Type 2 Diabetic. As the months passed a re-opening of the Hotel was proposed in July but due to the epidemic I realised that things would not continue to be “Zena friendly” with so many new rules and regulations to be observed.

Although my hours at the Hotel involved various office jobs my main involvement was with people – talking to them about the history of the Mansion House and surrounding Estate.
The new “restrictions” would make close contacts rather difficult and that was an essential part of what I did to give people an interesting experience.

After thinking about things I made the decision to give notice and “walk away” on my terms – it was 35 years by then and with my 75th birthday just been celebrated it fell into place.
It did cause a few ripples on the surface initially with a call from management expressing surprise at my decision.

So after answering an advert for a clerical assistant in 1985 through to July 2020 my world changed completely. I found myself still waking at 6.00am as if I was due for an early shift on the Hotel switchboard – one of the many things I did as part of the “front of house” team.
It took a while to get out of that routine!

My 7 years in the Estate Office had given me an insight into what was perhaps a unique environment – one that was slightly unreal to the world outside of the Estate.
There were moves afoot to make big changes to update things by Nicholas Phillips which unfortunately proved to be a problem rather than a solution. After his death in 1991 the Estate went into a state of disbelief for some months.

With internal changes taking place I was moved over to the “Big House” in early 1992 and found myself along with the small team there trying to sort out what was going on ! 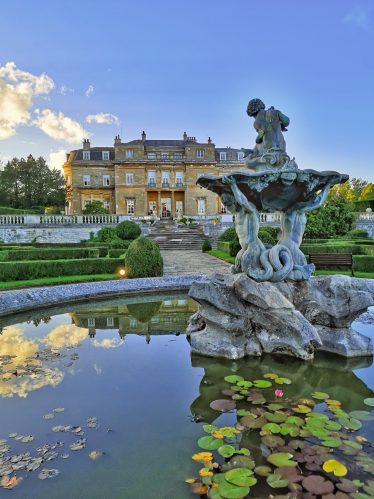 Another view of Luton Hoo

That first year in 1992 was quite a roller-coaster ride but it opened my eyes to lots of of oddities that were, once again unique to the actual Mansion itself. Gradually things began to feel that we were getting somewhere – although the future was uncertain we ploughed on. Without going into all the details of the following 8 years I can only say they were quite amazing. From a shaky start there followed multiple enquiries – filming / weddings / corporate events – plus major happenings of firework and music concerts and even the  Antiques Roadshow! Alongside all this the Art Collection was open to the public as well – to improve the way it was run we had changed to coach parties pre- booked on Tuesdays to Thursdays with general public days on Fridays Saturdays & Sundays – closed on Mondays.

Something else happened over time when I found myself having to greet coach parties arriving to visit the Art Collection – “public speaking” had never been something I was fond of but I found myself managing to speak to quite large groups eventually.
Having already become aware of lots of the history of both the family and the building I found my self not only giving talks to guests and visitors but being asked off site to give my talk to lots of clubs and associations both locally and further afield. At the busiest couple of years my diary records that I had totalled 3,500 people each year both at the Hotel combined with off-site talks.

So……..as mentioned at the beginning of this article when life changed I decided to do what many people had said I “should write a book” – that’s what I’ve been doing for the last 18 months.

On my 8th notebook at the moment – not sure how it will proceed but hope to somehow get to publication – any suggestions would be gratefully received!