The former Engine Hotel that still stands on the corner of Silver St and Bute St, is on our route to Luton Station. The ornate stained and leaded glass windows were often admired by those walking past, while the building was in operation as a pub and still remembered in conversation after it was vacated and boarded up. Me and my husband decided to restore them and give a new life to the building! 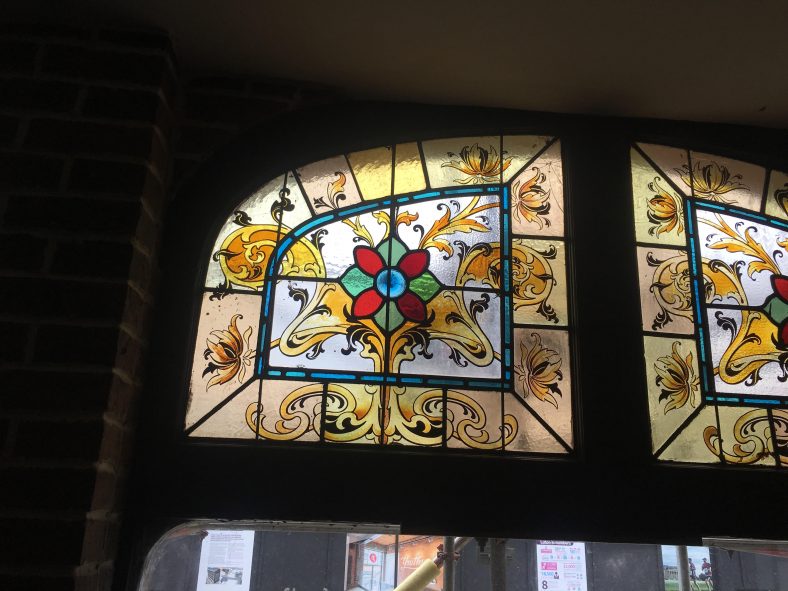 My husband Ricky and I spend a great deal of time looking at old architectural features in the towns we visit as musicians. We aren’t experts by any means, but we both have an appreciation for social history and traditional crafts. Ricky is a metal worker and I am a traditional printer and sign-writer and we both teach these skills in a London university, as our “day jobs”. 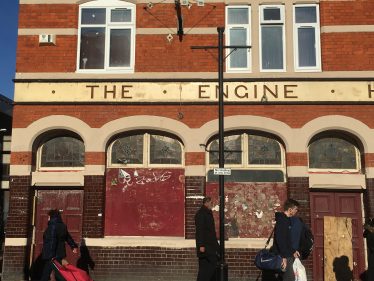 The former Engine Hotel that still stands on the corner of Silver St and Bute St, is on our route to Luton Station. The ornate stained and leaded glass windows were often admired by those walking past, while the building was in operation as a pub and still remembered in conversation after it was vacated and boarded up. However, the boards came down one day in 2016 and it was obvious there was some contractor action. We really hoped this magnificent building would be restored sympathetically,  to be appreciated by future generations.

Depressingly though, the dark red salt-glazed tiles on the frontage were chipped away, so something more contemporary could be adhered in their place. The “Engine Hotel” incised stone fascia, which caused much excitement and speculation on social media when it saw daylight again, had been drilled for an electrical cable. The two sets of heavy pine double doors with their hand forged iron-work had also gone, in favour of some glass and chrome doors, so things weren’t looking good for the windows either! 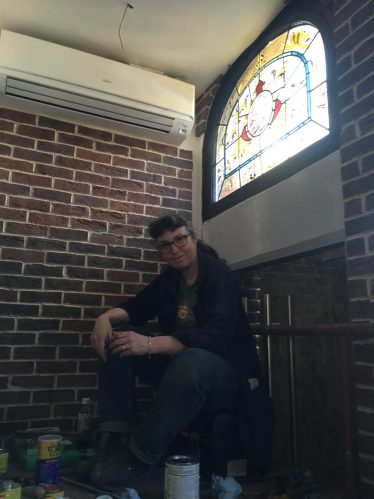 Eventually we managed to track down and talk to the building’s owner and asked about the windows. The idea being we would save them and donate them to the Wardown Museum, as they were obviously so well loved in the town. We even offered to remove them ourselves as a clumsy attempt with a contractor’s chisel was now evident. At the last minute, the owner had a change of heart and asked if we would help him restore them, so he could have them as a feature in his new venture. The windows weren’t in great condition anyway, as decades of being in a “lively” Luton location had taken their toll and possibly the big fire at the Vyse hat factory next door.  We contacted a couple of stained and leaded glass companies and set up meetings,  but their quotes were more than the owner had budgeted for.

Incidentally, the stained glass process is one where colour is painted on, then fired into the glass at high temperature in a kiln, so it remains transparent and light shines through. Obviously any large-scale repair work is problematic, as complete sections of windows have to be removed and re-manufactured. If the colour just sits on the top, as in the repaired panels, the result is darker, as no light passes through.

As a last attempt to stabilise and keep these windows in situ, until proper restoration could be afforded, we offered to step in. I have to say, neither of us are glass-workers, but I do have some experience in glass gilding, verre églomisé and pictorial sign-work. We were also very keen to do our best to save them by whatever means the owner would agree to! 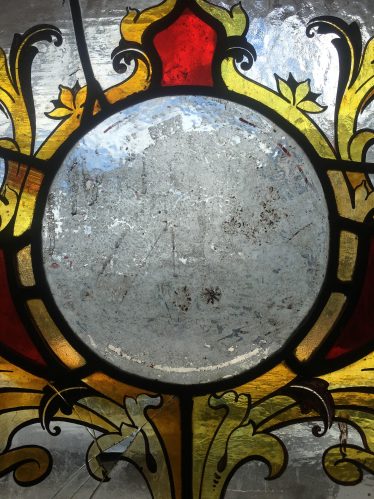 On close inspection, it was evident that in the past, many of the glass sections had been broken and replaced, (or just remained broken) and the stained glass had been re-painted in with enamel paint, where sections were missing, including a second train on the right hand door fan-light, which had been accidentally cleaned off with solvent. I assume again, the re-glazing and over painting was down to costs and practicality in the past. We assembled our scaffolding tower, made drawings and took photographs which were then printed actual size, so I could make more detailed drawings of the designs in keeping, where sections were missing. Glass repair sections were cut to be stuck in place by Ricky, where the sections were cracked or missing, carefully bending back the damaged lead channels in place.

After performing paint tests and colour-matching, I would then over paint these, as had been done in previous repairs, but add several layers of varnish for further protection. Eventually the patching up was complete and I set to with many drawings, paint and brushes to try and bring back some of the former glory. 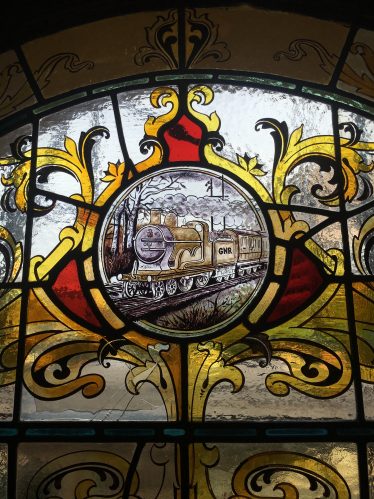 The acanthus leaves and other features were truly exquisite and having in interest in decorative glass work, some of the nicest I’ve seen. The train was also really something special with the wheel configuration and GNR number clearly on show. A superb example of craftsmanship and not a cheap job either! From this I assume the hotel would have served passengers from Luton’s Bute St Station, the windows were custom made and I’d hazard a guess 1900 – 1910. It would have been owned by JW Green at the time (and I think I recall a long gone JW Green acid etched window too, if someone would like to confirm this, or correct me). I’ve searched for more details on the class of locomotive, but so far have only come up with a few reasonably close examples, so I defer to the knowledge of those who know more about this subject than I!

However, I do know that the owner takes a great deal of pride in this building, was open to our suggestions and listened to what we had to tell him about preserving the windows. He has installed canopies to further protect them from the weather and every time we walk past them on the way to and from the station and see them illuminated, we have a little smile, knowing that others can simply enjoy looking at these delightful windows for a while longer. Have a look next time you’re passing!

Now the Engine has had a rebirth and has survived to serve refreshments to it’s customers once more, maybe not in the same way as years gone by and the appearance reflects differing ideas of local tradition and culture. Have a look next time you’re passing!