You are here: HomenextExhibitionsnextBuildingsnextListed buildings and local listnextSt Marys Baptistry: A gift to encourage the people of Luton.

St Marys Baptistry: A gift to encourage the people of Luton.

Peter Adams is a senior member from St Marys Church, Luton’s only Grade 1 listed building. In this article he tells the story of one of the most ancient and treasured features of the church – its 14th century baptistry.

A Step Back in Time

About September 1348, St Marys churchyard. As a time traveller, standing in the churchyard at St Marys you would see a building remarkably like the one you see now. Our dear church had already seen 200 years of Luton’s story. But two things would strike you. The tower was only half built, the work apparently long halted. And the walls would look very yellow, without the striking black and white checkerboard design of the stonework we are so used to. That would only come in another 200 years, and then only on the porches, with the rest taking until the late 1800s to be complete. Still, the church would have seemed quite familiar. But cast your eyes around. The view of the town beyond the churchyard would seem a bit like Armageddon. Burnt remains of wooden homes stood everywhere, little intact. 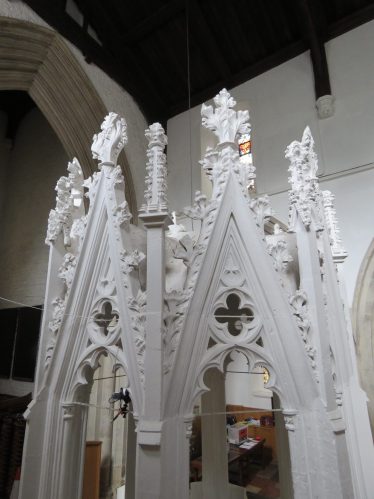 A devastating fire just a couple of years ago had destroyed much of the prosperous market town that was Medieval Luton. In the midst of charred remains, timbers had been half-heartedly thrown together to provide shelter, and attempts made to start to rebuild life and trade. But for some reason the recovery had obviously stopped. Where are all the people? Ah, that’s better, you can hear the sound of a horse and cart making its way in your direction.

The voice shouting from the cart is not clear. But as it draws closer a voice warns you to stay away. The cart makes its way into the churchyard, stacked with makeshift coffins, and stops by an open pit.

By the time the cart leaves the pit is full and covered over. It’s clear that the broken earth all around you is the site of other mass graves. The plague we now call the Black Death is taking its ugly toll. Across England in 1348 and the years that followed around one third of the population would die from the plague. It’s impact would shake the economy and after several very difficult years would lead to major social and economic change. But amidst terrible news from all over the nation, the plight of Luton, recovering from a devastating fire as well as the plague, became known to the King Edward III.

The story would particularly impact his gentle and devout Queen, Philippa of Hainaut. Wanting to encourage the people of Luton she decided to give a gift to them. That gift was St Marys Baptistry. The church’s magnificent stone baptistery, with the font inside it is very rare.

Many fonts have a grand cover, this is the only one in England to have a walk-in stone canopy. An extended family along with godparents gathering to baptise a child can all fit inside!

The baptistery would once upon a time have been richly (or some would say gaudily) painted and with gold embossing, but for many years now has been white

A Testimony to Suffering

Rare as it is, the story of how our Baptistry came to be in St Marys Luton is even better! The story reminds us that while we often hear we are in in unprecedented times, our old church has seen it all before. It has seen the worst of human suffering. It has stood closed for years as public health crises meant people had to stay away. And it has seen recovery, life restored and celebration. Approaching it’s 900th year, the church, and especially our wonderful baptistry are symbols of God’s presence with us in the difficult times, of his restoring power.

Recovery Is a Promise

It would take Luton in 1348 many years to recover. The economic impact of the Black Death and the fire was huge. The church tower would not be completed for another forty years. But life and prosperity would return. As the impact of Coronavirus on our church, our community life, and the economy of the town are only just becoming clear we may wonder what lies ahead. Life in the future may look different. But we can be sure, recovery will come for us today as it did in 1348