Lutonians have recently commemorated the centenary of the burning down of their “old Town Hall”. It was the need for a public building where court proceedings could take place that first necessitated the construction of this building in 1847. Built with the help of local businessmen, the classical construction with Doric columns served as location for various social functions until the 20th July 1919, when it has been reduced to ashes. 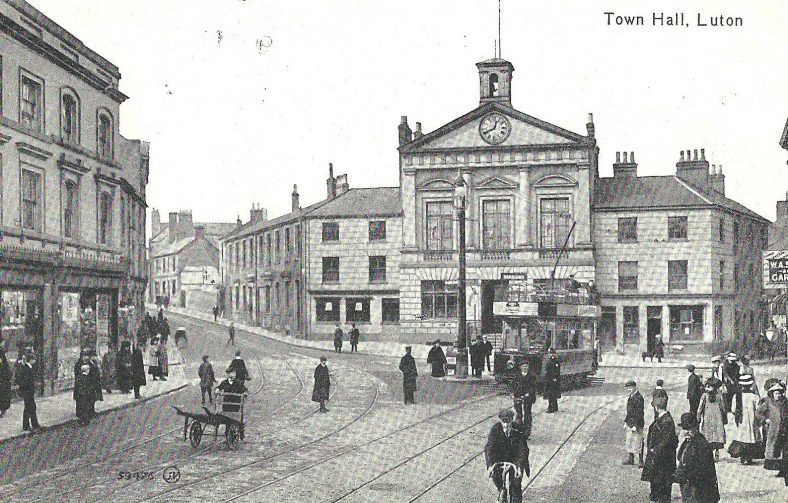 The expansion of Luton’s population in the mid-nineteenth century had led to the establishment of a county court in 1846 to deal with increases in crime. As there was no local authority, it fell to local businessmen to provide the funding, most notably Robert How, John Higgins and Richard Hazelhurst, who were straw hat manufacturers, and Charles Austin, a solicitor. These men formed the Luton Town Hall Company and sold shares valued at £10 each. 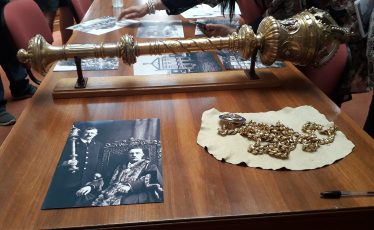 The site chosen for the new building was known as Cross Hill, originally a farm and stables located at the junction of the roads to Bedford and Dunstable. Three houses and a garden occupied the space in 1846. The Town Hall was constructed by John William and sons and designed by Evan Owen Williams in the classical style of the day with Doric (Greek style) columns. It opened on 27th August 1847 having cost £2200 to build.

The new building consisted of a basement, an entrance hall with two rooms on each side and a large room straight ahead with two small adjoining rooms. A broad staircase led to a large assembly room with a balcony. The smaller rooms were used for meetings and rented out to organisations such as the Luton Literary and Scientific Institution, the Savings Bank, the Great Northern Railway ticket office and the School Board, with the large room being used by the police and the County Courts. Upstairs, the large assembly room was used for public meetings and entertainment.

In 1856 a small clock and bell tower were added to the building to commemorate the end of the Crimean War. The clock was funded by public subscription and the bell chimed every hour.

Uses of the Town Hall for social functions were many and varied, from science and art classes five times a week in 1871 to the appearance of Miss De Montford, a mesmerist, in 1875. In My 1880 Luton Cricket Club held its annual concert at the Town Hall featuring “several London artistes” and in 1882 Reverend Arthur Mursell gave a lecture in connection with the Luton Wesleyan Young Men’s Christian Association. In December 1889 the building hosted Sarah Thorne’s Dramatic Company’ s play “Judge Not”. 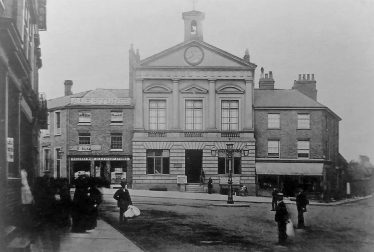 Sadly, the Town Hall was never financially successful. The County Court moved to a new building in Stuart Street in 1858 and in 1873 a decision was made to sell and dissolve the Town Hall Company. It was eventually sold to the Board of Health for £2,125 in 1875. In 1873 “The Luton Times and Advertiser” reported on the remodelling and expansion of the building using local bricks.

Three years later Luton received a Charter of Incorporation granting it borough status and the first meeting of the council took place in the Town Hall. It was now a local authority building, the new borough council taking over the work of the old Board of Health. With lots of new departments more office space was required and in 1887 the Belgium Arms pub next door was purchased to become the office for the Sanitary Inspector, Tolls Collector and the Inspector of Weights and Measures. In 1893 Rosson’s shop adjacent to the Town Hall, additional retail premises, a warehouse and a shop in Manchester Street were also acquired. The shop became the Food Office. In 1879 a butcher’s shop and three cottages in Upper George Street were also purchased by the Council.

The end of the “old Town Hall”

Had fate not intervened with the burning down of the Town Hall in 1919 it is possible that the original building might have had to be demolished. Following the destruction “The Luton Reporter” had referred to the destroyed building as:

by no means an imposing or particularly attractive building.

The paper also noted that the town had outgrown the building 25 years earlier. In 1911 the council had petitioned a bill to build afresh on the existing site and the Luton Corporation Act was passed to enable this eventuality. During 1913-14 the Corporation were looking at the practicalities of building a new municipal building. The outbreak of WWI would mean their plans were put on hold, although as late as 1918 the Council considered putting the idea of a new building to the public.

On 20th July 1919 Lutonians walking up George Street would find their Town Hall a burnt out ruin. All archives and relics, including portions of a manorial roll from 1409, were destroyed. It would be a further seventeen years before the building we see today occupied the empty space left behind.