When my two Lutonian uncles, George and Harry, grew up in a large family, their different personalities led to personal conflicts that reflected also in their professional choices. When George was on duty as “Special Constable” during the Peace Day Riots, Harry, a proclaimed butcher, found a way to express his resentments during the confusion of the event. 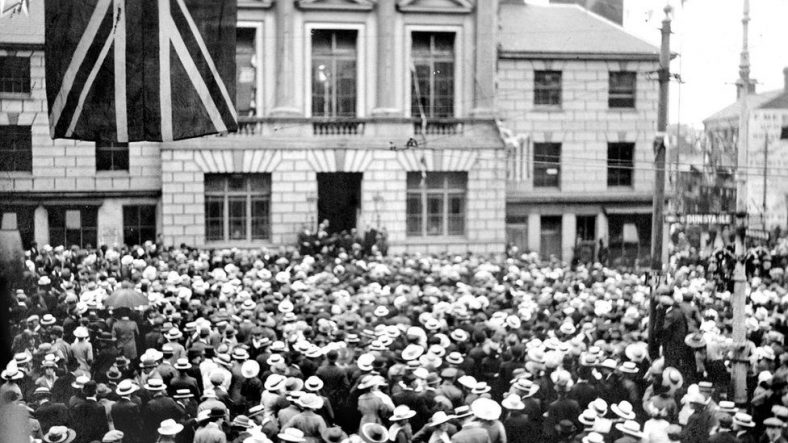 Gathering at the Town Hall

Like any large families – my mother was actually one of ten (five boys and five girls) – there are always some that just don’t get on. Their personalities just clash.

Mum’s two brothers, George and Harry, never really got on and it was believed to be because George worked in an office whilst Harry was a butcher, which he considered to be a much more “masculine employment”.

Indeed, all of the brothers except George were all employed in manual employment, whilst George alone worked in an office.

George was also a “Special Constable”, which I suppose didn’t help the situation either and, come the day of the Peace Day Riots – when Luton Town Hall was burnt down –  George was just one of many such people called in to assist in endeavouring to keep law and order.

George was apparently on duty at the burning Town Hall, when he was hit by a brick – which hit him on the head; that resulted in him having to be removed from the main line of action so he that could be treated for the blow to his head.

As the Town Hall was surrounded by what could only be classed as an “angry mob”, it wasn’t possible to see or confirm who had actually thrown the brick that hit him, but it was known that Brother Harry was at the Town Hall. George had indeed seen him there, however, when other members of the family asked outright: “Harry did you throw the brick that hit your Brother George?”,  the answer they got was strictly non-committal. In fact, Harry refused to give any kind of answer. He just gave a knowing kind of smile that more of less said it all.

Even years later Harry never ever did admit to throwing the brick that hit his brother and to all subsequent queries over the years only ever answered with that smile that said ‘I know everything but am saying nothing’.

George, on the other hand, swore that it was Harry that had thrown the brick – he just couldn’t back it up with indisputable evidence.

George and Harry never resolved their differences to the end of their days and Harry took the mystery of ‘who threw the brick’ to his grave.