You are here: HomenextUncategorizednextLuton Past - Chapter 7 - Two Main Streets of Luton Past - by Ken Cooper 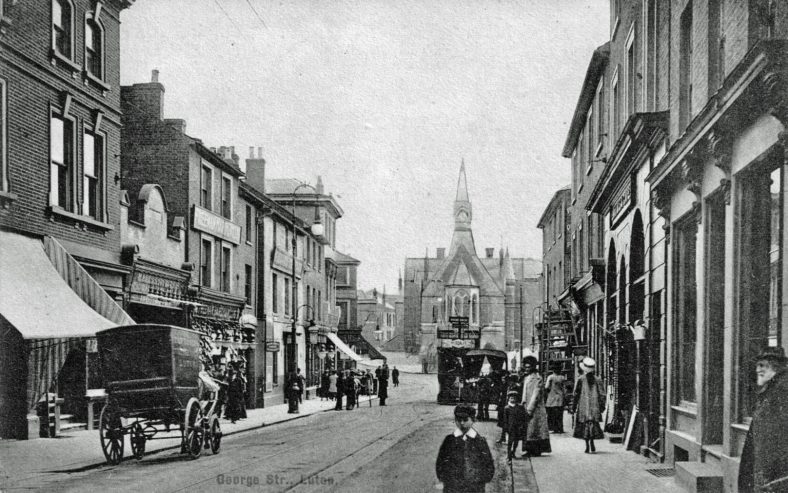 Chapter 7 – A look at two main Streets of Luton Past.

George Street has certainly seen more than its fair share of changes over the years, from village High Street lined with huddled farmhouses and ancient inns to today’s paved concourse thronged with jostling pedestrians. In its time it has witnessed the passage of peddlers with pannier-laden ponies, trim horse-drawn carriages serving the gentry bands of armed men on the move during the Civil War and the rumble of stage coaches travelling the rutted roads to London. 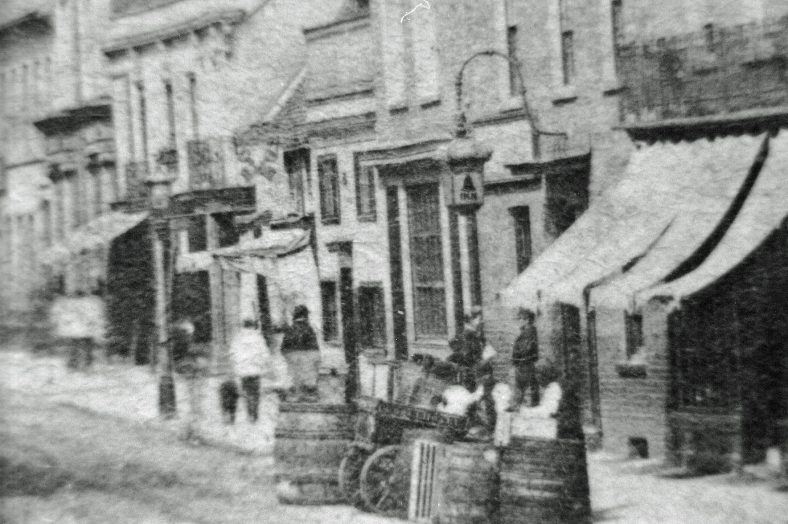 George Street C.1860/70. One of the earliest known photographs of the main street used as an illustration on a “carte de visite”. Two of the old inn signs, that of The Bell and The Cross Keys, may be seen. The shop on the right is the ironmongery department of Gibbs and Dandy, an old Luton company that recently celebrated its 160th anniversary.

As the expansion of Luton began to accelerate in the 19th century it is not surprising to find that the burgeoning hat industry took root in the main street. Gradually the old farmsteads public houses and sleazy hotels were bought out and replaced by plait warehouses and large hat factories. By 1823 the Marquess of Bute had laid out the select private road, Wellington Street, which was lined with attractive housing intended for professionals and hat manufacturers. Unfortunately, as with many private roads, the maintenance was neglected and in 1845 the Board of Health assumed the responsibility of the street’s upkeep. A few of these old town houses still exist in Wellington Street hiding behind the facades of modern shop-fronts.

In the 1850s, because the street was no longer private, some of the residents moved out, changing the character of the street and paving the way for an influx of retail traders. The shops that the traders opened soon led to Wellington Street being acknowledged as the best street for shopping in Luton. Many of the originally founded businesses stayed in the street for over a hundred years until denuded of trade by the opening of the Arndale Centre. 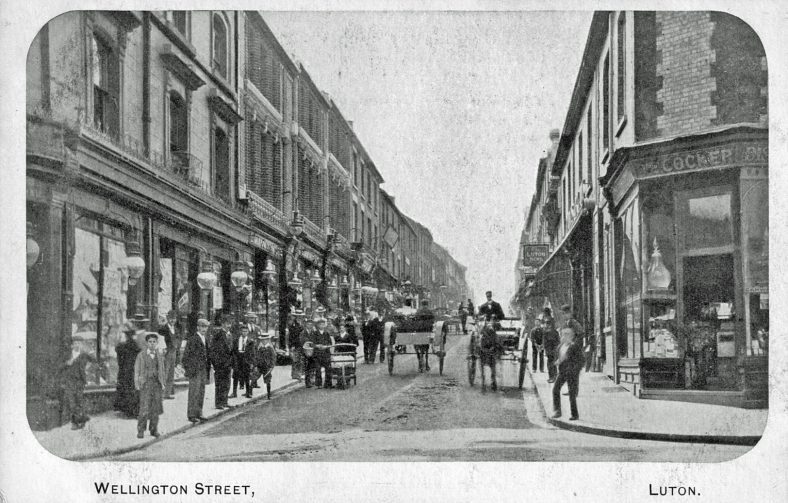 Wellington Street, 1905, looking from George Street towards Peel Street. Above shop-window level the size and shape of the original town-houses can be seen. The stock displayed in the windows attracted crowds of window-shoppers, even after dark, when the gas lamps were turned on. 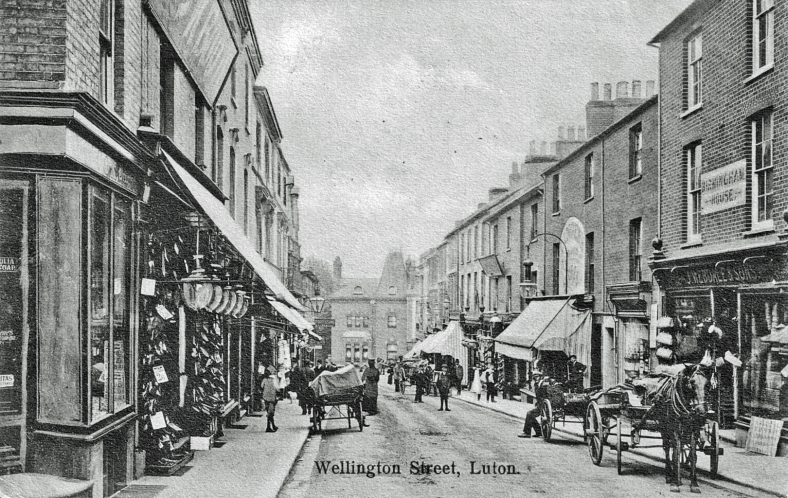 Wellington Street, 1905, looking from Peel Street towards George Street. The first shop on the right is marked “Birmingham House”, a relic of the time it was a town house in a select private road. In the boot and shoe shop on the left, shoes cost two shillings and sixpence, 12.5 pence in our coinage.

Although recent attempts to regenerate Wellington Street have been partially successful, today’s shoppers would find it hard to credit the number or variety of business ventures it housed in its heyday in the early years of the twentieth century. An analysis of the type and number of businesses and shops in Wellington Street, well established by 1905 – 8 Drapers, 2 Confectioners, 1 Butcher, 1 Hardware, 4 Boot & shoe, 2 Piano & organs, 1 Dairy, 1 Jeweller, 4 Chemists, 2 Printers, 1 Dentist, 1 Photographer, 4 Outfitters, 2 Milliners, 1 Dyeworks, 1Sewing machines, 3 Grocers, 1 Baker, 1 Fruiterer, 1Tobacconist, 3 Plait merchants, 1 Blockmaker, 1 Furnisher and 1 Watchmaker. 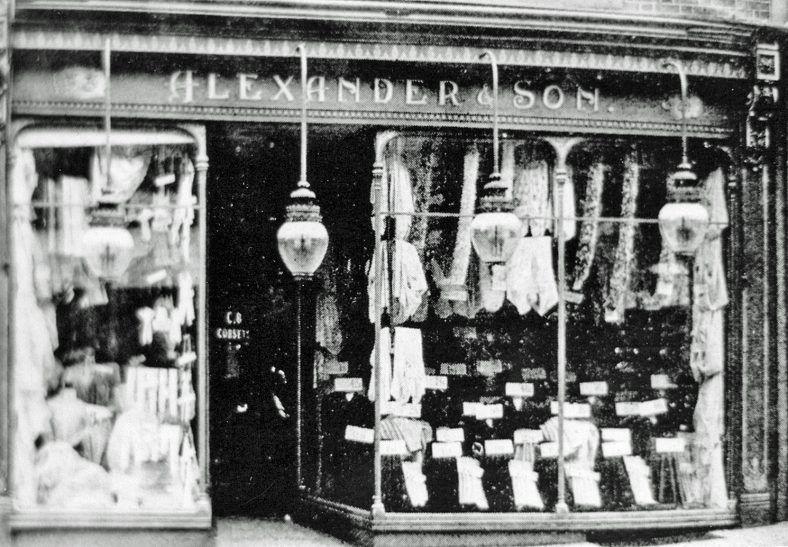 An exterior view of Alexander and Sonof Wellington Street in 1907. They were Drapers, Dressmakers, Lacemen and Furriers. The business was founded in 1889 and its motto was “Ladies may rely on both our style and fit”. 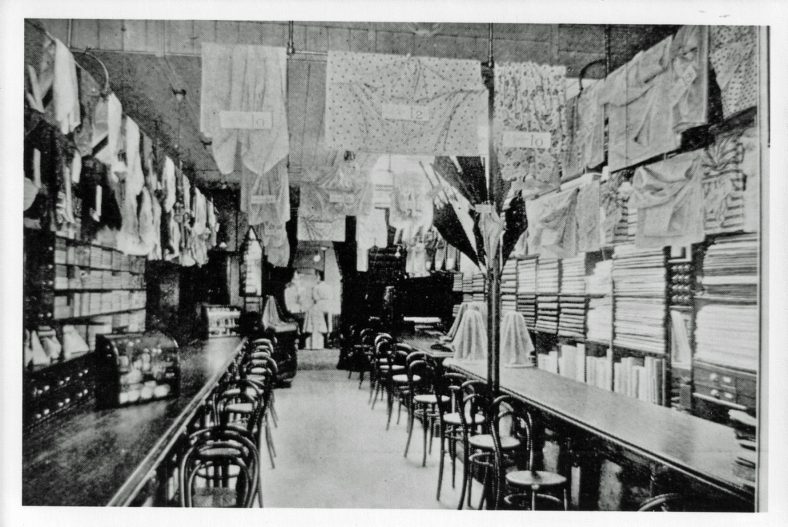 An interior view of Alexander and Son, showing the wide serving counters and the large number of chairs available so that customers could choose from the range of fabrics on display in comfort.

Changes in the occupancy of properties in shopping streets are inevitable and yet Wellington Street, until its decline in the late 1960s, kept its aura of sharp respectability. Members of the older generation will no doubt recall collecting their school uniforms from Lacey and Son or Alexander and Son. The chemist shops were identified with ornate golden framed lamps, shaded with blue or ruby-red glass and their shop windows decorated with large flasks of luminescent fluids. Odours permeating from shop doorways also played their part in creating the special atmosphere that pervaded Wellington Street. The smell of starched linen from the drapers, leather from the boot and shoe shops, the dry, dusty smell of paper from the book-sellers and the “new” smell of clean clothes in the outfitters all added to the business-like charm to be found in this, Luton’s first shopping street. 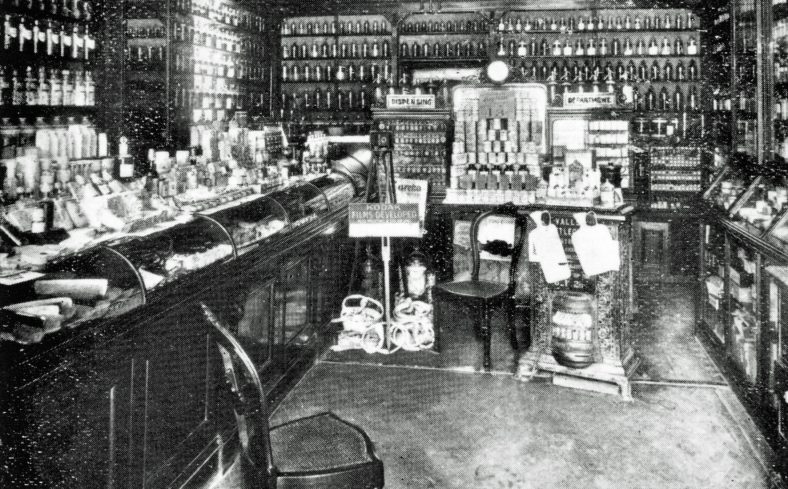 An interior view of Wootton and Webb, Chemists. The shelves were lined with jars of drugs and medicaments, the counter packed high with patent medicines and the display cabinets full of perfumes and beauty aids. Trusses and hot-water-bottles are at a lower level. Notice the Kodak camera, tripod and film development offer.

At the same time that Wellington Street was being developed, new roads and properties were being built to the east of George Street to satisfy the rapidly growing hat industry. Today, the three entrances giving access to the Arndale Centre from St. George’s Square and George Street mark the location of Williamson Street, Bute Street and Cheapside, streets that ran between George Street and Guildford Street before the shopping centre was built. Although Luton’s hat trade was fragmented throughout the town, the area bounded by these old streets is considered to be the heartland of the industry, where the majority of the larger factories were situated. 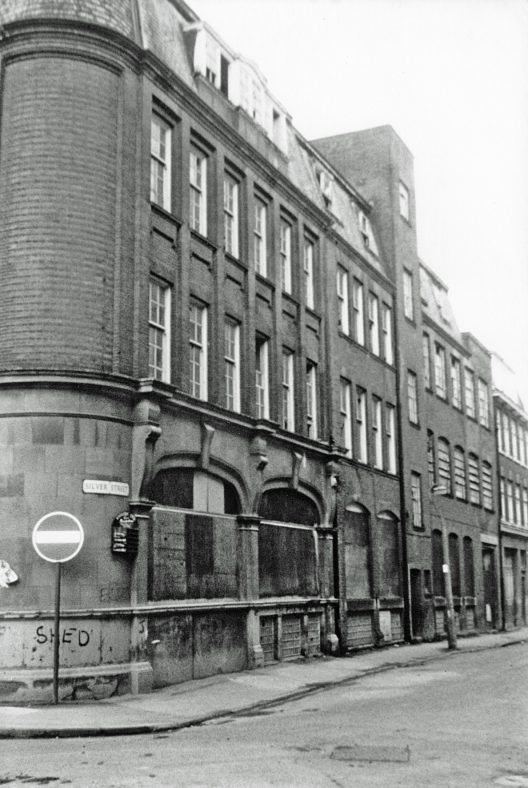 Dilapidated, closed and boarded, this row of hat factories in Silver Street await their demolition in 1968. The first portion of the factory on the left (two windows) originally belonged to Edmund Wiseman, the inventor of the Handstitch Sewing Machine, capable of machine sewing women’s straw hats much quicker than by hand. One of Luton’s few associations with Roman times was discovered when foundations for an extension were dug, exposing the outline of a Roman workshop and clay tile firing kiln.

Gradually the spaces left in George Street by relocated hat factories, demolished public houses like The Cross Keys and The Black Swan, and some old houses, were replaced with banks and new shops to augment the successful businesses in Wellington Street. The early years of the twentieth century saw a proliferation of shops in Luton especially corner shops and general stores, often in small groups to serve a local community.

George Street as it was in 1908. The hat factories were gradually leaving the main street and shops filling any spare places. When the ancient public house The Cross Keys was demolished in 1905, the site was soon snapped up by two men from London who wanted to establish a Penny Bazaar. It stands on the left, partly obscured by the delivery van. Oh! The men’s names? Mr. Marks and Mr. Spencer. Note the watering-can outside Jennings and Gates Iron-mongers.

A comparison of the contents of Wellington Street in 1905 and George Street 1950 shows the significant changes in type of shops and facilities over 45 years. In 1950 the clothing shops in George Street catered mostly for middle-class male or female Lutonians. There were ten men’s and eight women’s clothiers in George Street alone,  choice that is only dreamed of by shoppers of today. George Street also boasted three dispensing chemists, two outlets selling wines and spirits, a furrier, a DIY materials shop, two butcher’s shops, a cinema, two furniture stores, six boot and shoe shops, five hairdressing salons, two grocers, two tobacconists, Electricity and Gas showrooms, two jeweller’s shops, a British Home Stores, an ironmongery shop, an F. W. Woolworths and Marks and Spencer stores, five banks, a library, the George Hotel, three cafes and a Corn Exchange. 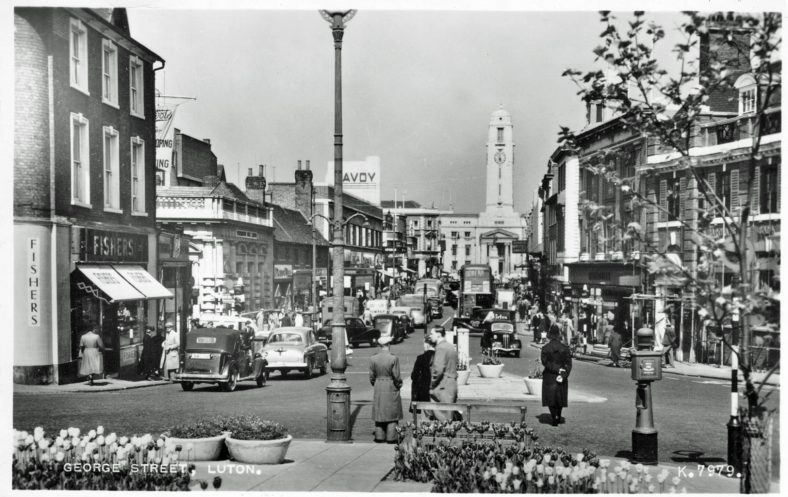 George Street as it was in the early 1950s . The centre of a town just getting on its feet after the second World War, with low unemployment, a growing population and relatively high wages, all of which reflected their living and shopping habits. It was an exciting time to live and work in what became known as Booming Luton.

Some fifty years later (in 2000), of the businesses listed, only the Marks and Spencer store, four banks and the British Home Stores Ltd. remain in George Street.