You are here: HomenextUncategorizednextLuton Past - Chapter 6 - Of Horses and Horse-power - by Ken Cooper 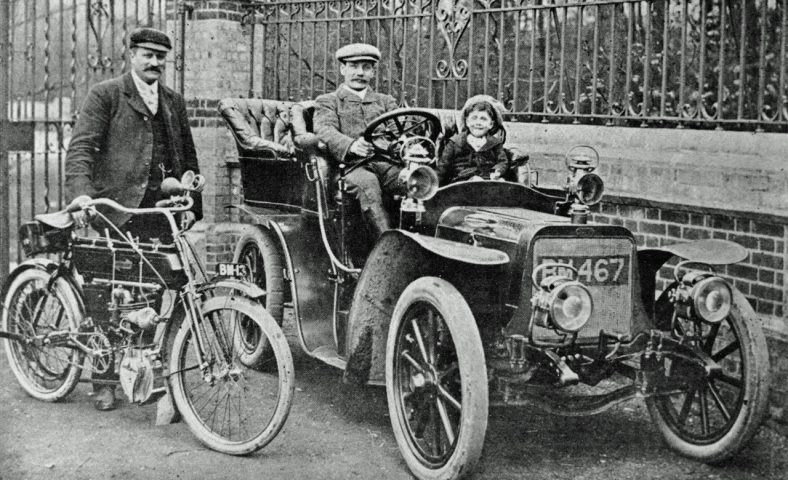 Chapter 6 – Of Horses and Horse-power.

When the railway companies opened up the country in the mid 1800s it completely revolutionised a nation that had come to rely on the horse to move its mail, goods and people. Until steam trains made it possible to visit major towns and cities along the rail routes, the only feasible means of transport was by horse, horse-drawn vehicle or walking. Little wonder the railway engine became known as the “iron horse”. Horses still had their uses for local journeys, for instance, shopping deliveries by tradesmen and those used in the town and village carrier network. 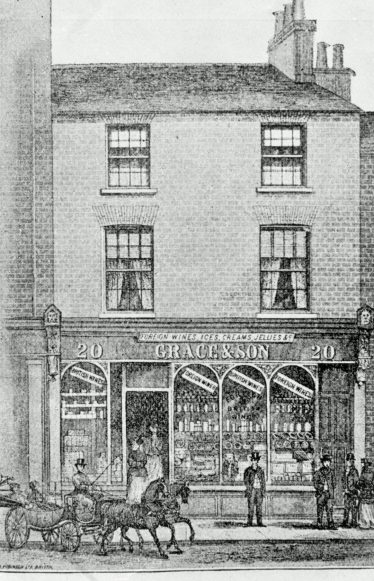 An etching of 1880 showing how the rich went shopping in Luton. Part of an advertisement for Grace & Son, Cooks and Confectioners of Park Square.

The railways also used horses to distribute the goods they carried and tolerated the hansom cab owners who took railway passengers home from the station cab rank. In Luton there were also hansom cab ranks outside the Free Library in Williamson Street and at the Town Hall in George Street.

Using an eye-catching silhouette of a hansom cab was a good way of drawing attention to the several services that cab proprietors offered.

For social occasions such as church outings or sporting fixtures it was possible to hire wagonettes or brakes harnessed with one or two horses to visit outlying districts. 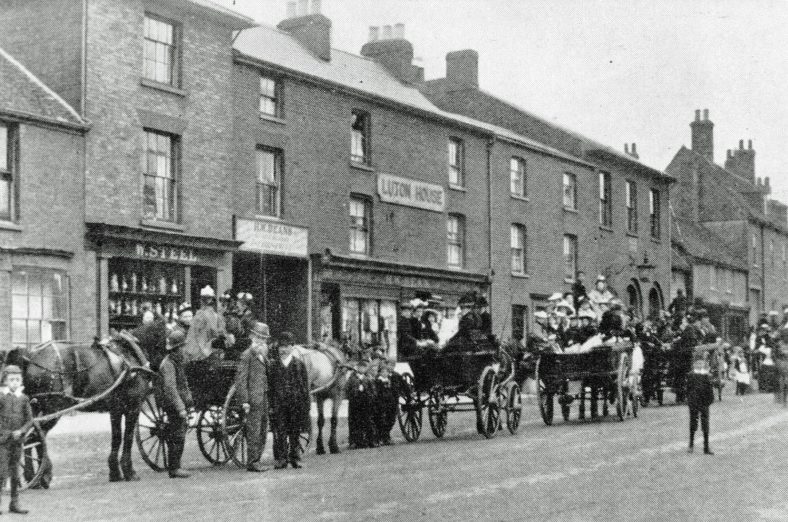 A social outing from Park Street, showing the wide variety of vehicles used.

Horse-drawn buses were employed in Luton as a means of public transport several years before the introduction of trams and buses. They started from George Street, terminating at Leagrave or Wardown Park in New Bedford Road, both of which were regarded as beauty spots. In the early 1900s there were so many horses employed in Luton that road-sweepers in the main streets were kept busy clearing pathways through the horse manure, to prevent the long dresses that Edwardian women wore becoming soiled.

In the late 1860’s Brown and Green, an engineering company with premises in Windsor Street, started manufacturing bone-shakers under the trade name of “The Express Velocipede”. These crude bicycles costing £7-10 shillings each were really just fun machines for the rich and were little more than elaborate toy hobby horses. They had wrought iron wheels, handle-bar steering and a steel frame fitted with a patented “Luton Instanter” brake! As a refinement they came fitted with a soft pigskin saddle and “would be painted in the colour of the customer’s desire”.

The gap between the velocipede and the so-called safety bicycle was filled by a strange machine which because of the size of its wheels, a large front and small rear, reminded people of two coins, the penny and the farthing. It was a name that stuck with this awkward bicycle. Although quite popular with some male members of the Cyclists Touring Club, the penny-farthing was difficult for men to ride and almost impossible for women who wore long skirts or crinolines. 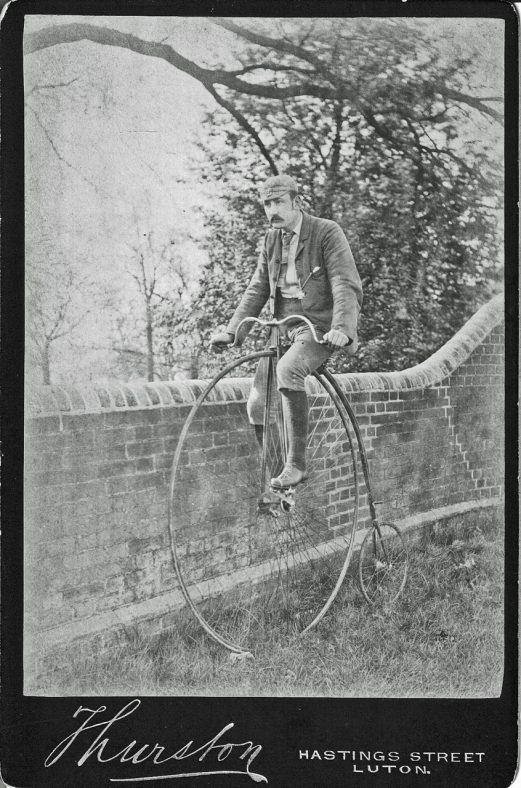 A posed photograph of a penny-farthing bicycle standing on Park Road bridge. Notice the mounting step on the frame above the rear wheel, the solid tyres and the large number of spokes needed to keep the wheels running true.

The advent of the safety bicycle introduced two wheels of the same size and were considerably more stable than the penny- farthing. Not only that, because there was a choice of two frame designs, one of which catered for women wearing long skirts, bicycles became suitable for men or women to ride. Bicycles opened new worlds for the general public enabling them to explore the country-side and making their journeys between home and work easier. 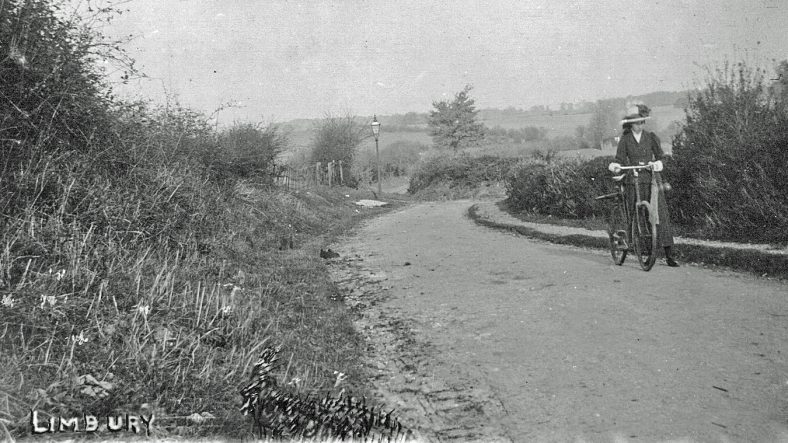 A young woman pushes her safety bicycle in Limbury Road. An unrecognisable rural landscape for today’s cyclists, who now ride through a completely urban scene.

Motor-cars first started running on British roads in 1894 but were not well received by the public at large because they were noisy, dirty and smelly. Old laws forbade cars to travel at more than ten miles an hour and they had to be preceded by a man carrying a red flag. This law was repealed two years later and in 1903 a twenty miles an hour speed limit was introduced. By 1906/7 Luton had a thriving motor club with upwards of fifty members. It enjoyed social and sporting activities, including time trials and hill climbs at nearby Aston Clinton.

Mr. W. A. Sale owned a garage in George Street and his car, a 1906 Darracq Tourer often featured in street scenes of that era. He is seen here with his son by the entrance gates of Wardown Park.

When cars first appeared, industry and business took no notice of what was considered to be “the new-fangled vehicles of the pleasure seekers” and retained traditional tried and trusted methods of collection and delivery. 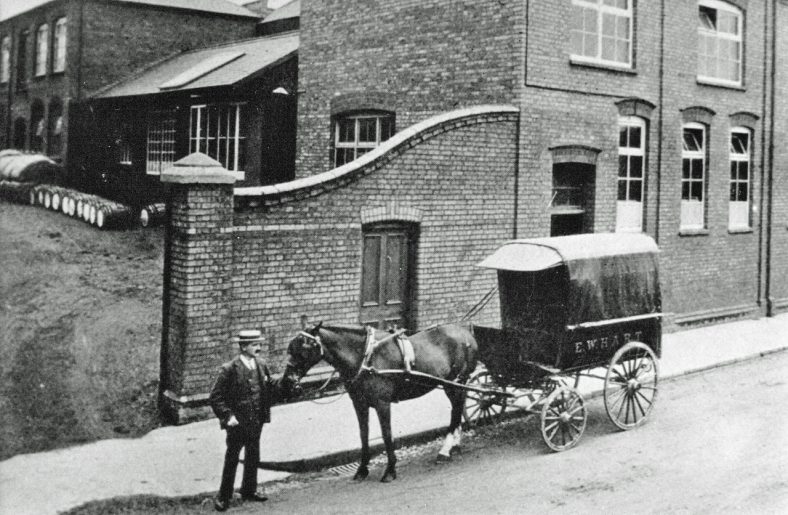 This delivery van is typical of vehicles used in smaller businesses to deliver cartons of hats to “out door trimmers”, women who worked at home sewing the ribbon and decorations onto straw or felt hoods.

However there was no stopping the tide of the motor-car and as time passed more of them could be seen parked or being driven through the streets of Luton. It was not surprising that Lutonians were interested in cars, for their staple trade was being challenged by the establishment of factories in the town to manufacture them.

In 1908, a new form of transport in the shape of the electric tram was about to make an appearance on the streets of Luton. As the introduction of railways had changed the way of life at a national level, trams altered the lifestyle of Lutonians locally. The trams brought cheap transport and mobility to otherwise insular districts and led to the expansion of retail trading, as in the case of Dunstable Road, Park Street and High Town Road, where shops sprang up along their routes. As can be seen in “Highways and Byways” (Chapter 2), at the time of the trams, the basic layout of Luton’s streets had not been changed in almost a hundred years and were not really wide enough to accommodate the daily ebb and flow of tram and hat industry traffic. The congestion and aggravation that the town’s narrow streets caused were the forerunners of today’s parking problems and road rage! 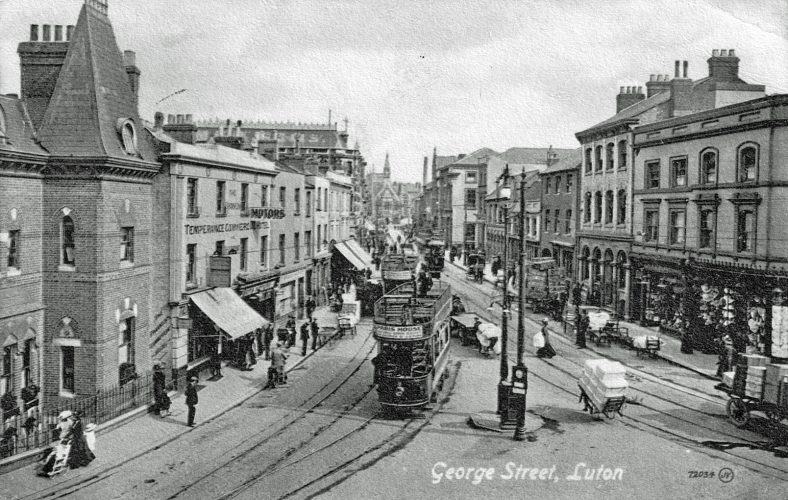 Taken from the Town Hall, looking through George Street toward the Corn Exchange, this view shows the amount of congestion that trams caused, even at slack times.

During the first World War, Vauxhall Motors and Commer Cars, who by this time were well established, supplied staff cars and ambulances to help the war effort. The design experience and improved reliability gained in the course of the conflict was used in their range of post war vehicles. Popular too were cycles fitted with motors or engines, they were sold under various names such as cyclette, motor-cycle or motor-bike. Cheap petrol brought affordable motoring within the pocket of many, introducing unheard-of new words into the language, such as valve-lifter, magneto, belt-drive, needle-valve and float-chamber. Garages sprang up across towns and country-side supplying the oils and petrols to keep lorries, cars and motor-cycles on the move. The choice of fuels and lubricants varied as did the claims of mileage and performance by the motorists! 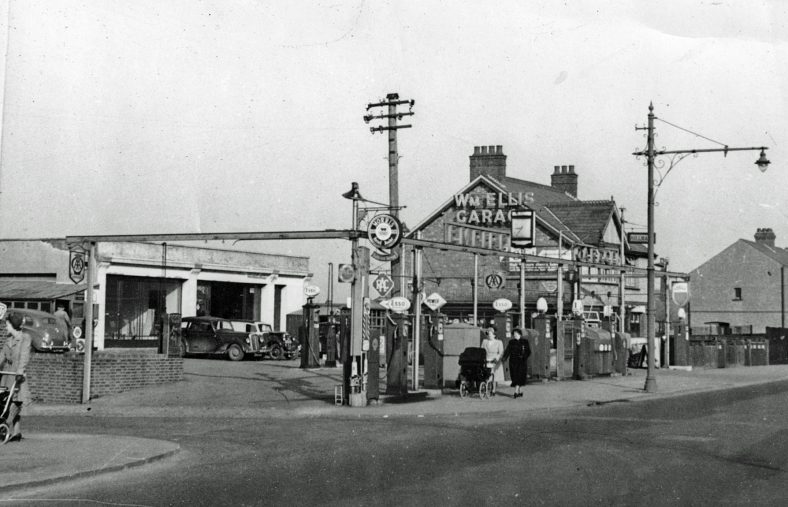 Toward the end of the 1920s, private omnibus and motor-coach companies began to compete with the trams, offering comfort, speed and weather-proofing. These companies also ran scheduled trips to London and Luton’s satellite villages. 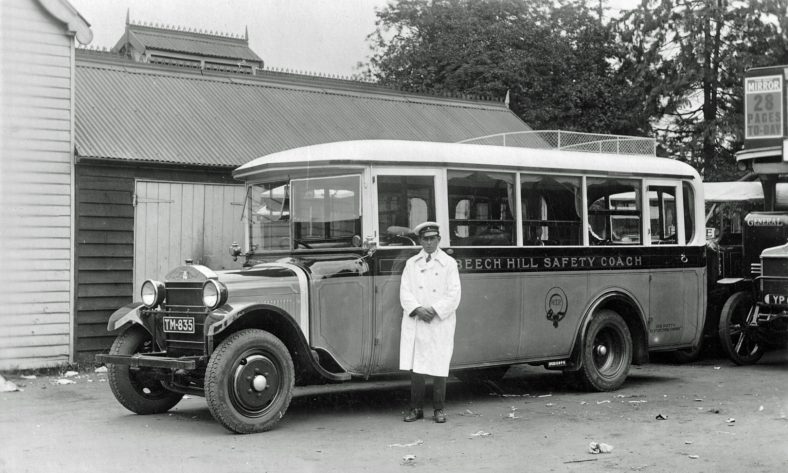 The motto written on the coach’s rear door proclaims, “We study your comfort”, which when combined with the speed of 12MPH shown near the rear wheel, accounted for the name Safety Coach. The comfort offered by Coaches of this type indirectly ousted the trams from Luton’s streets.

By 1932, due to the congestion the trams caused as passengers boarded or alighted, high maintenance cost of the tramway system, and low profits, it was decided to replace the trams with buses. The Luton Corporation Transport buses were faster and more maneuverable than the trams and were able to provide flexible lunch-time services to factories, Vauxhall Motors for instance, so that the work-force could go home to lunch and return in the allotted lunch break, even though living on the outskirts of the town. 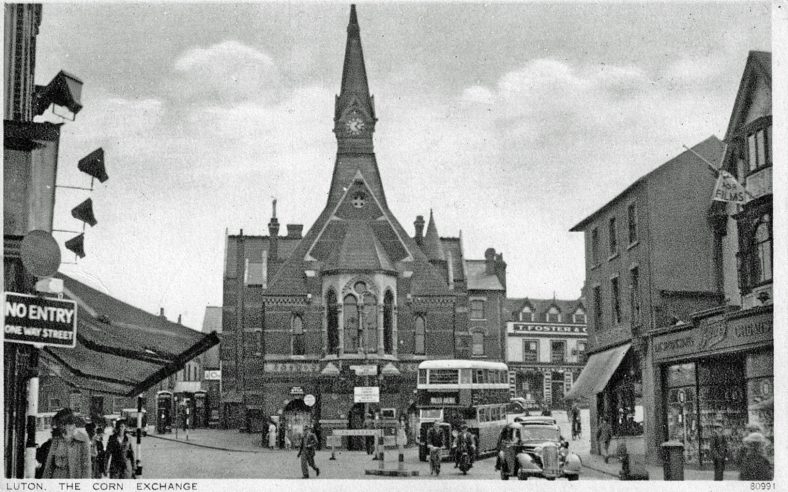 A bus of Luton Corporation Transport moves down Market Hill, by the Corn Exchange. Not being on fixed rails like the trams, their routes about the town were far more extensive and could be altered to suit road conditions when necessary. The indicator shows the bus to be going to Waller Avenue, an impossible journey by tram.

Nevertheless, the buses didn’t solve the car parking problems in the town, for there were few designated car-parks and motorists had to make do with unilateral on-street parking at one of the available side-streets in pre-Arndale Luton. 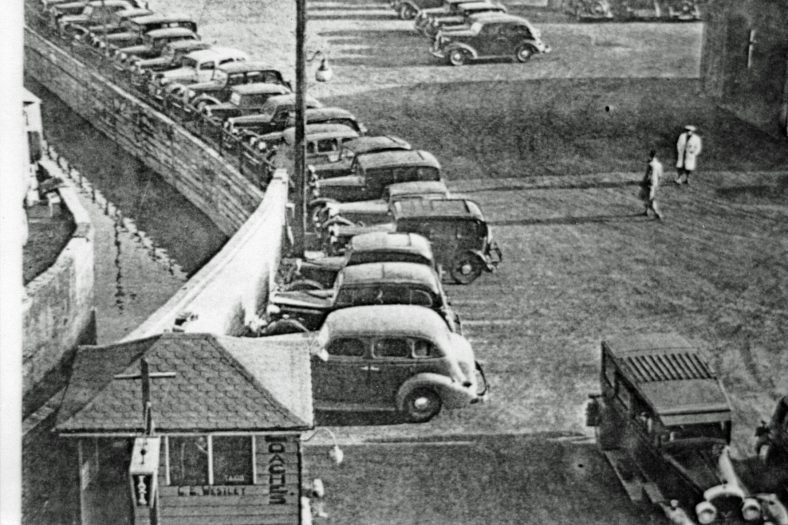 A pre-war photograph of Bridge Street Car Park, bounded on the eastern edge by the River Lea. The river was culverted during the construction of the Library in 1961 and the old car parking area paved and put to grass to form St. George’s Square. 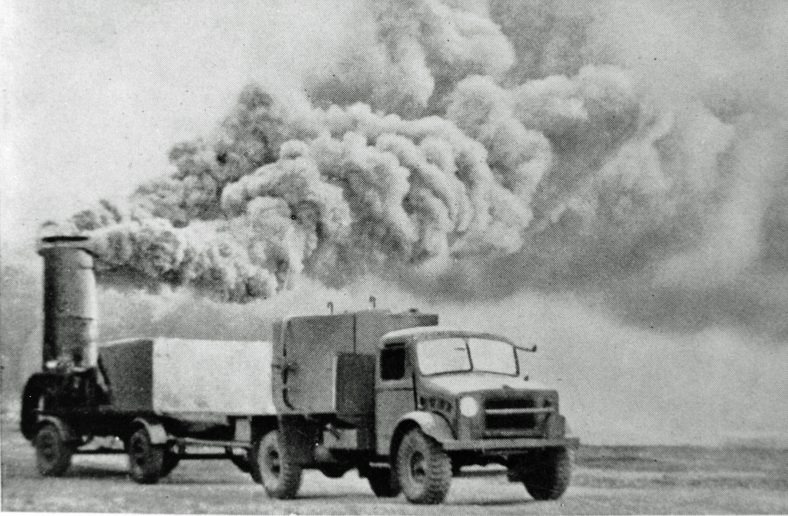 This Bedford truck and Haslar smoke generator is just one of the special purpose vehicles made by Vauxhall Motors Ltd. during the second World War. Almost 250,000 Bedfords were produced, the great majority for the Armed Services.

The use of private motor-cars was forbidden during the war and even business-motoring was rigidly controlled by strict petrol rationing. By law, when left unattended, all vehicles had to be immobilised by the removal of the engine’s rotor arm. In general, the traffic seen on Luton’s streets in wartime was confined to bicycles, buses, A.R.P. (Air Raid Precaution) vehicles, Post Office vans, army lorries and official business users. The streets were very much quieter than they are today!

It took the country, especially the manufacturing industries, several years to recover from the deprivations and shortages of the war years. With the accent on exports, there was virtually no car production for the home market, the price of second hand cars that had been laid up during the war soared and “Used Car Lots” flourished. The first new post-war cars to appear were mainly up-graded pre-war models, but the manufacturers soon erected new buildings, tooled up for new generation models and by the mid-1950’s the great flood of motor-cars started pouring from the factories again.

The inherent problems of the car, traffic jams and parking became particularly acute in and around the town centre at factory starting and finishing times. In the 1960s, specific areas in the town were made available for parking, a new multi-storey car park built in Regent Street and a parking meter scheme introduced for the central area. Toward the end of the decade an ambitious scheme to bypass the town centre by building a ring road around its periphery was begun. Unfortunately, because of financial troubles, only the western portion was completed. 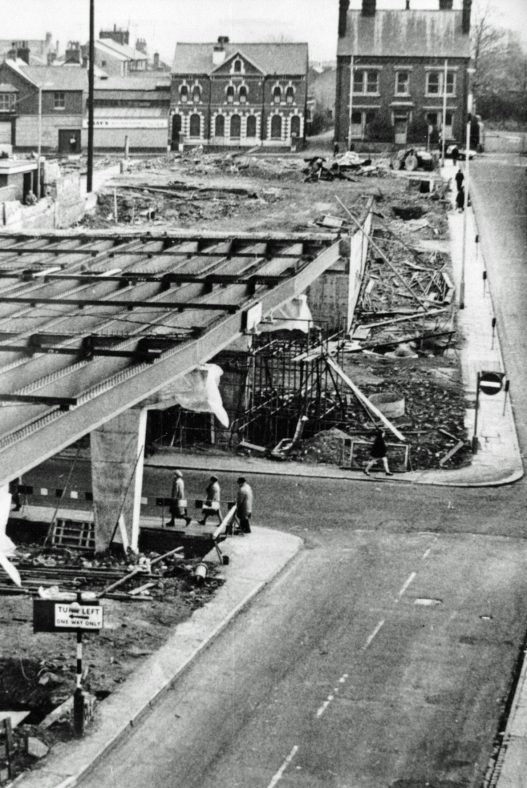 The road bridge spanning Chapel Street was part of the planned ring road meant to alleviate traffic congestion in the town centre in 1967/8. The view, looking from Regent Street multi-storey car park shows the foundations and steelwork of the bridge and the houses about to be demolished in Castle Street. Notice the hooded parking meters in Victoria Street, on the right.

The association of Luton and the motor-car is a continually changing marriage beset with problems, the solution of which will ensure further chapters of Horses and Horse-power waiting in the wings.