You are here: HomenextUncategorizednextLuton Past - Chapter 5 - The Lodges of Luton - by Ken Cooper

Luton Past - Chapter 5 - The Lodges of Luton - by Ken Cooper 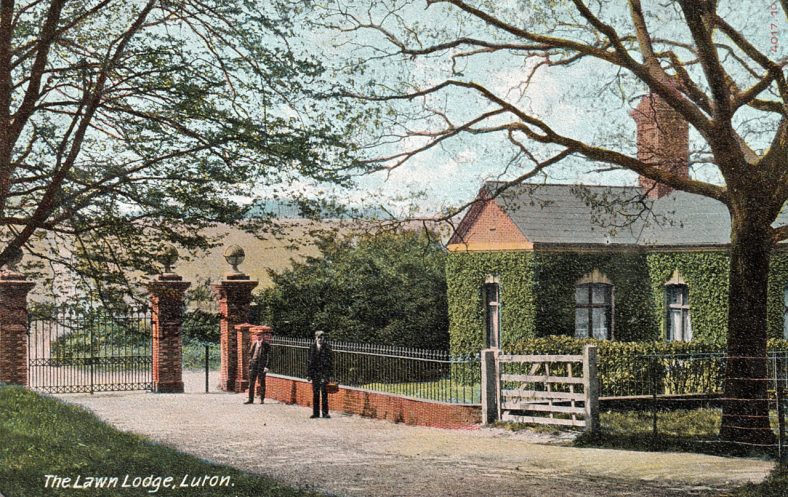 Chapter 5 – The Lodges of Luton

The word Lodge has several meanings, most of them referring to somewhere to live or carry out some form of service or duty. It is also associated with similar words such as lodger, one who pays in cash or kind to “live in”, or lodgings, a place in which to live. It is certainly of ancient usage and may be found in the Bible in the Book of Isaiah, (Ch. 1 v.8) when he chastises Judah and mentions “being in a lodge in a cucumber field”. Shakespeare has Antonio say in Twelfth Night, “In the south suburbs, at the Elephant, is best to lodge”.

The term lodge, when applied to castles and later to stately homes or mansions, usually referred to accommodation for a retainer who supervised the opening and closing of the entrance gates and looked after important visitors, their retinue and horses. He became known as a gate-keeper, or from the French word Porte, corrupted to porter who lived in the porter’s lodge. The earliest known example in Luton of such a lodge is to be found in the so-called Someries Castle, situated near Someries Farm, adjacent to the runway boundary of London-Luton Airport. Today the ruin of this 15th century fortified manor house comprises a twin turreted gatehouse, entrance hall, large chapel (now open to the sky), ancillary side-rooms and a spiral staircase. In the late 18th century Henry Gough, librarian to the Marquess of Bute and noted historian, wrote of this ruin “The gateway entrance hall is twenty feet long, …from it, doors opened at the south-west to a room with a fire-place and window over-looking a courtyard, probably the porter’s lodge”. 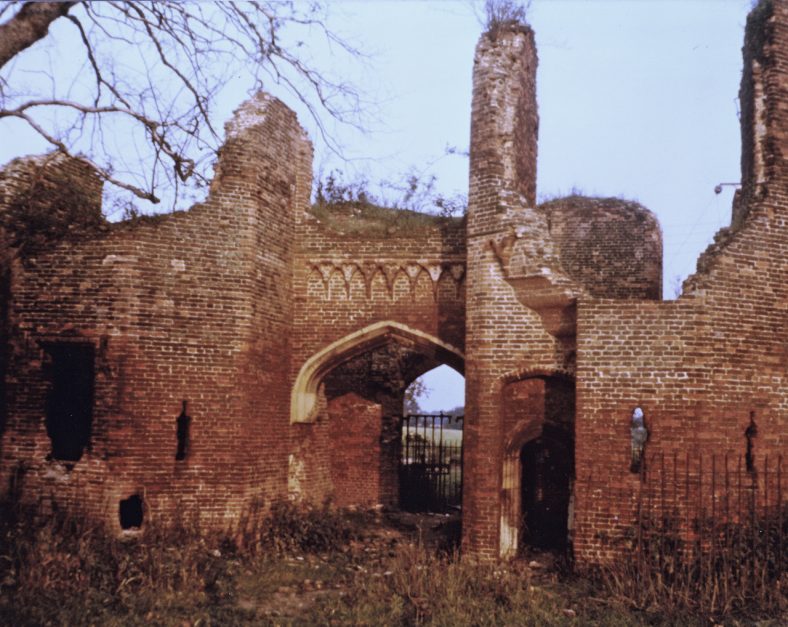 The gatehouse of the fortified manor-house of Someries showing the entry to the Porter’s Lodge to the right of the main gateway. Dating back to the mid 15th century, Someries is thought to be the oldest brick built manor-house in the country.

As castles gave way to mansions, stately homes and country seats, landowners needed some sort of architectural feature at the entrance of their estates to impress either visitors or present a symbol of power to intimidate unwanted callers. The job description of the porter changed too, for although he was still expected to open and close the main gates, game-keeping and garden supervision were added to his duties. Despite the decline in the ownership of castles, an aggressive front was used when building lodges, many resembling mini-fortresses with crenellated battlements and ornate turrets. The earlier of the Luton Hoo Lodges followed this pattern, having been added at the time the estate was being upgraded by Robert Adam and Capability Brown. 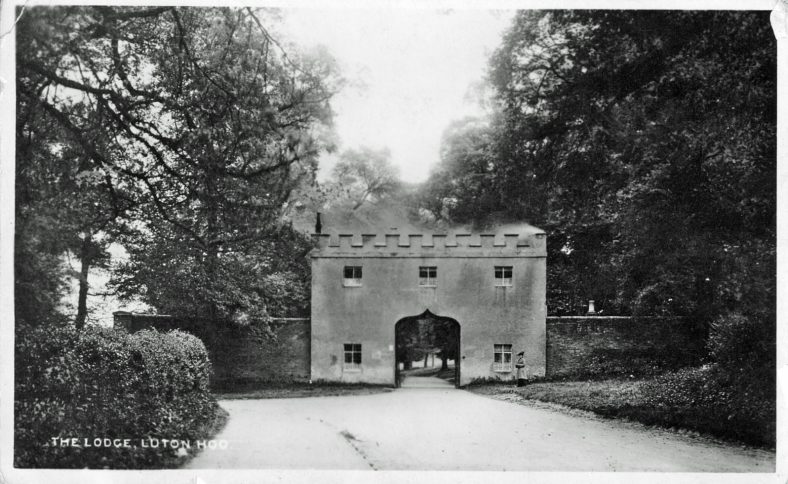 Luton Lodge, Luton Hoo Park. A quaint example of a late 18th century country estate gatehouse. The rural setting made it a natural target for photographers and enjoyed by walkers and courting couples.

When Julius Wernher bought Luton Hoo in 1903, he was not particularly interested in its historical background and soon set about modernising the whole estate. The Luton Lodge at Park Road was demolished in 1907 and replaced by the two detached houses that can be seen today, a backwater hidden by the embankments of Airport Way. 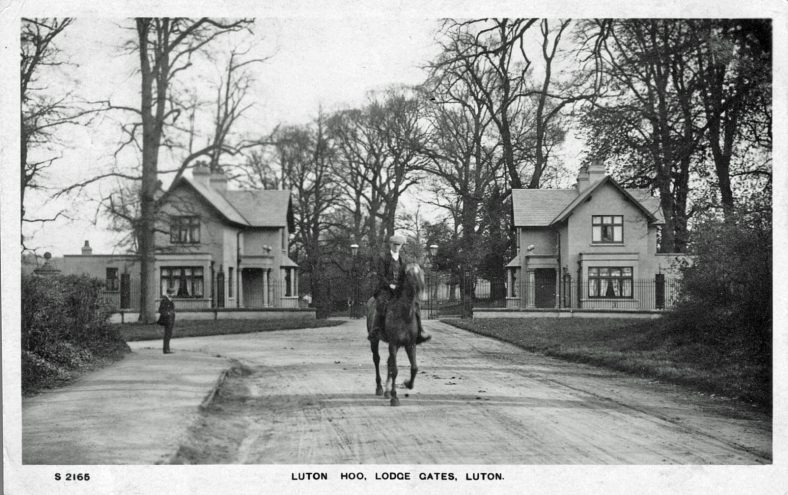 Two new Luton Lodges in the form of modern houses caused considerable controversy in 1907 when they replaced the old original castellated gatehouse.

The demolition of the old lodge caused quite a stir in Luton since, with the proximity of the pretty thatched cottage “Why-Axe-Ye”, and the green and leafy aspect there-by, this area of Park Road was regarded as one of the most romantic and photogenic parts of the town. 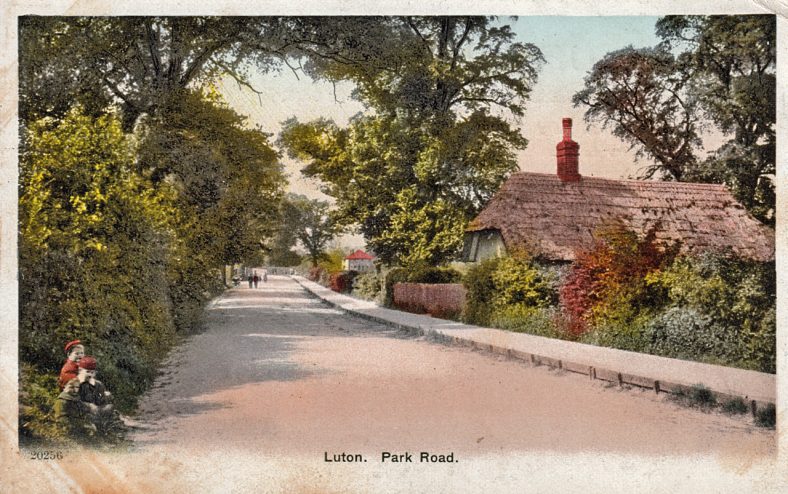 The rustic life hung on here in Park Road until the late 1920s, when this photogenic thatched cottage with the controversial name “Why-axe-ye” was demolished. Passers-by who asked the origin of such a strange name would be met with a dead-pan expression and the answer “Why do you ask?”.

The London Road Lodge, built in the style of a castle, was the most imposing of the Hoo Lodges, but was replaced by a detached house during the occupancy of Sir Harold and Lady Zia Wernher, the new house being occupied by the Luton Hoo Estate Manager. 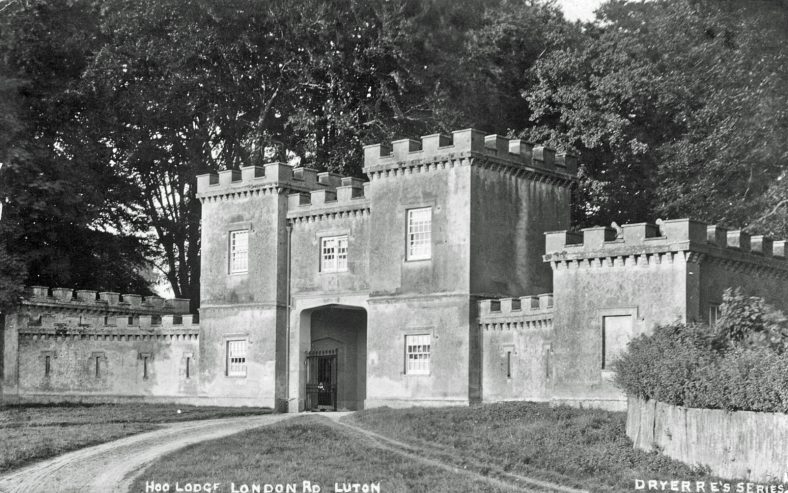 London Road Lodge showed an aggressive face to deter other than invited guests.I t was not until after the death of Lady Ludlow and Luton Hoo belonged to her son, Sir Harold Wernher, that the castle-like lodge was replaced with the softer image of a detached house.

On the Lower Harpenden Road there are two bungalows known as the Warren Lodges guarding the gates to Luton Hoo. The gates give access to Warren Hill, inside the estate, leading up to the mansion and were used in Edwardian times to convey guests of British and Foreign royalty from nearby Luton Hoo railway station. 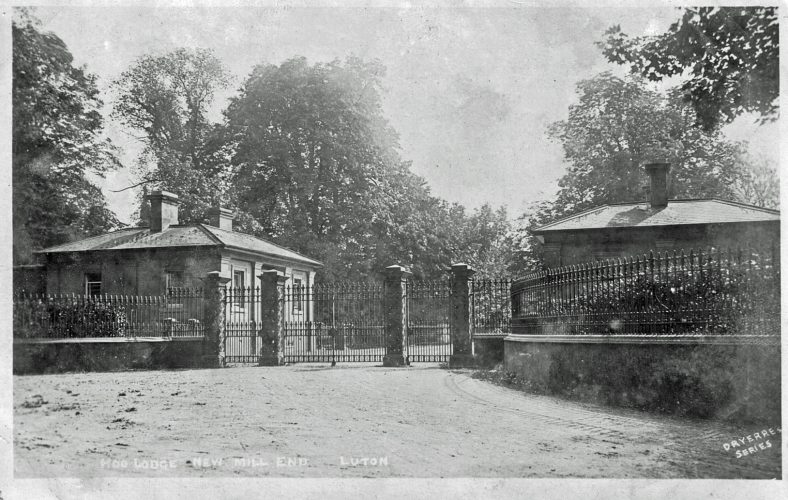 Stockwood Park, one-time seat of the Crawley Family and now owned by Luton borough Council, contained three lodges in its hey-day. There were two approaches to Stockwood House for carriages, the first when approaching from Farley Hill was known as The Avenue, lined with lime, horse-chestnut and oak trees, while the second, known as the Coach Road and lined with Spanish chestnut trees, ran from Newlands Road.

Overlooking the gates that gave access to the coach road to Stockwood House, Lawn Lodge saw generations of the Crawley family pass this way as they went about their business in Luton and the County.

The Stock-wood estate is also crossed by an ancient right-of-way called Lawn Path, this public footpath starts in London Road and leads to Woodside and Markyate, passing close by the Newlands Road Lodge on the way. The third Stockwood Lodge is a detatched house on the edge of the estate in London Road. 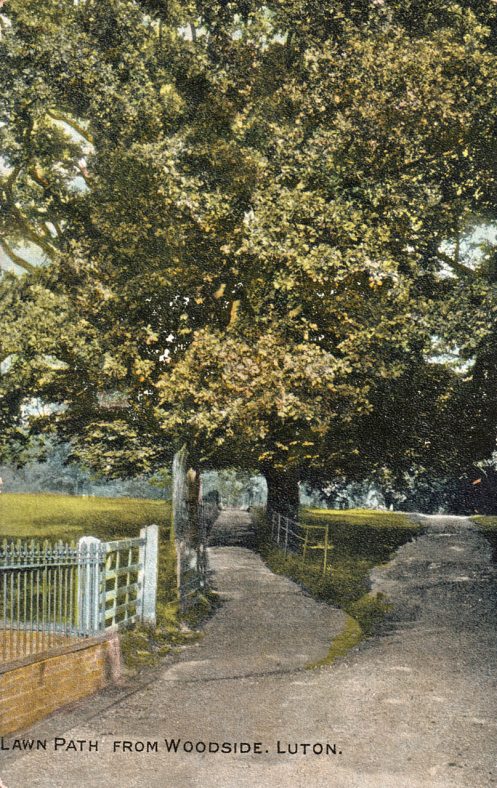 A view showing Lawn Path to the left and Coach Road on the right. Today both of these old byways are crossed by Stockwood Park golf course.

In 1894,the administration and running of People’s Park, Luton’s first public park, officially became the responsibility of the Corporation of Luton. The acquisition of this large open space of approximately 42.5 acres, warranted a house for the head park-keeper, known as People’s Park Lodge. His tasks included enforcing the Bye-Laws and making sure the park was open and closed at the correct times. 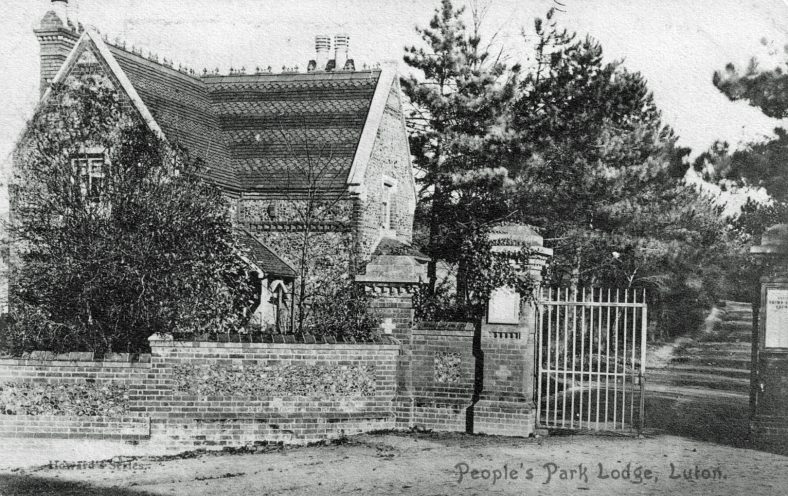 People’s Park Lodge is another of Luton’s Lodges that caught local photographer’s eyes. It graced many a postcard and was also the subject of several early stereographic pictures. Note the heavy gates and framed list of Bye-Laws on the gatepost. Afterhours, intruders were certainly not encouraged!

When Mr. Scargill built Bramingham Shott, or Wardown House as it is now called, he thoughtfully provided two lodges for the head gardener and groundsman, one in New Bedford Road and the other in Old Bedford Road. Both of these buildings are still in existence. 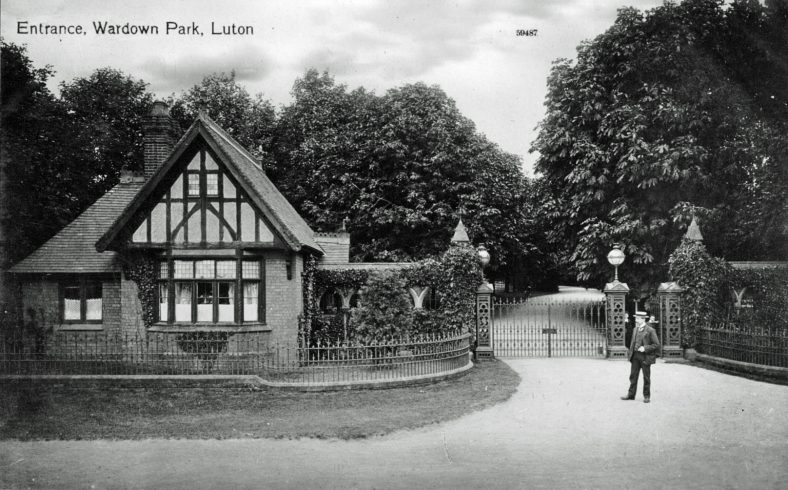 The turn-of-the-century view of New Bedford Road Lodge, with its backdrop of mature trees, ornate gates and mock-Tudor facade is the epitome of the ornamental cottage. Neat and tidy, it must have given Mr. Scargill a warm glow of satisfaction as he drove past on his way to Wardown House.

A lodge without an estate or “big house” is to be found in London Road near its junction with Ashton Road. The detached house, now a private dwelling, is all that remains of The Children’s Sick and Convalescent Home provided by local philanthropist Mr. A. P. Welch, J.P. The Children’s Home (or Hospital) became an Annexe of the Luton and Dunstable Hospital which was closed in the early 1980s. The site of the old hospital buildings is now a housing estate. 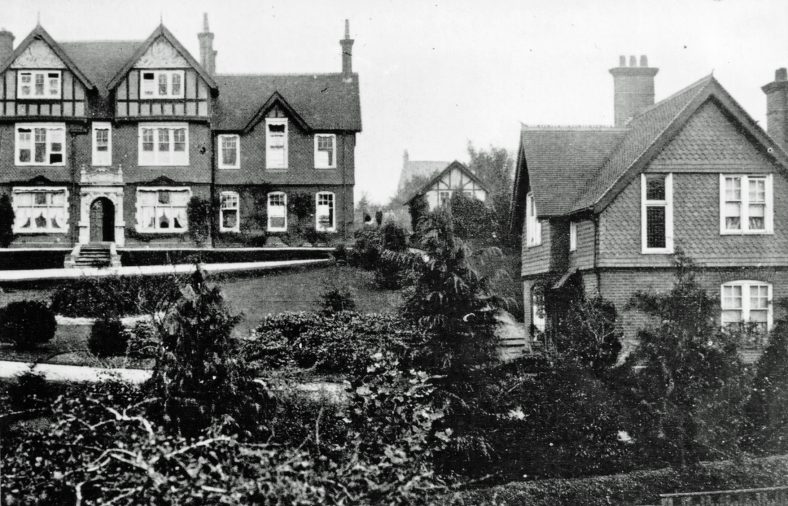 The lodge of the “Children’s Home”, or as it was later known the Children’s Annexe of the Luton And Dunstable Hospital, still exists in London Road. After rehousing the Annexe within the main hospital the rest of the buildings were demolished and the site used for housing. The lodge was often used as an isolation ward to deal with cases of scarlet fever.

The Tennyson Road entrance to Luton Hoo Memorial Park holds another of Luton’s Lodges, occupied by the groundsman who looks after the amenities there. This is a strangely sombre park haunted by the past of the occupants of Luton Hoo. 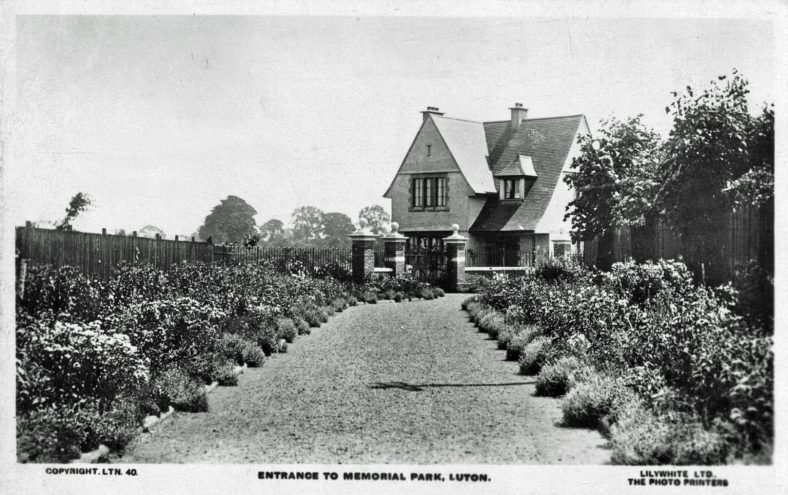 The Memorial Park Lodge makes no statement that it is anything other than a building of the 1920’s and yet in this case the gravelled entrance, imposing park gates and dominant presence qualifies it to be included in the list of Luton lodges.