TG Hobbs - The Coming of the Railways

“In his early years Mr Hobbs kept a diary, with the assistance of which he has recorded his recollections of three-quarters of a century. His memory is full of incidents – the coming of the railways, the hat trade of 50 years ago, and many other happenings which form the subject of this and future articles.”  Luton News, May 18, 1933. 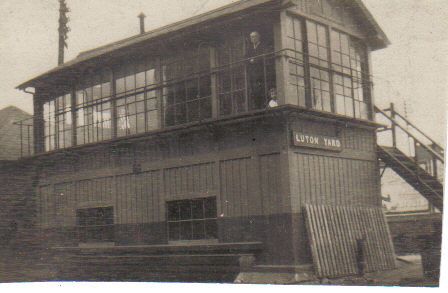 The Coming of the GNR

It was probably the first big concourse of people that I had ever seen when I witnessed the opening of that section of the Dunstable and Hertford Railway between Luton and Dunstable on March 8, 1858.

Extension of GNR to Luton and Dunstable, 1854

Until that time, and indeed until the railway was completed to Hatfield, Luton traffic had to be conveyed by lorry to Hitchin! My father once told me of a yokel who, seeing an engine for the first time, exclaimed: “Now I won’t believe but what they’re a lot o’ little ponies underneath”.

At Luton station a newspaper stall was opened, and in 1865 I was one of the two boys who opened the parcels of morning papers when they arrived by “the half past nine train”. These were The Times, Daily Telegraph, Daily News and Standard. I believe all were large sheets containing eight pages which had to be laid upon the floor and folded by hand. The wet ink was unpleasantly cold to our fingers on wintry mornings. By ten o’clock we started delivery (a few people would meet the train in) and I used to finish about noon.

We two boys delivered all the London papers then received in Luton! I had the centre of the town and Farley Hill to cover, and I remember a Mr Roth promised (and kept his promise) to give me a piece of cake for Christmas!

At odd times on the railway platform I would lower the only signal for the incoming train – telegraphy had not then come into general use – and I knew there was a clear road.

The Opening of the Midland 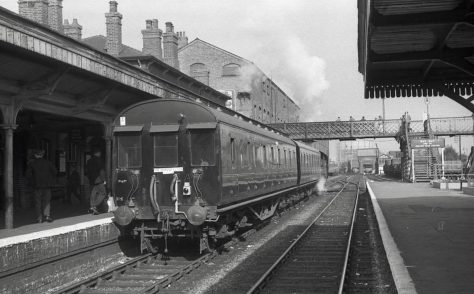 Until the Midland Railway from Bedford via Luton to St Pancras was made, passengers had to travel from the Midlands and Bedford via Hitchin to King’s Cross. It was probably in 1865 that the company started to carry a more direct line to St Pancras. As a boy of 12 I watched with feverish interest the attacks made by gangs of navvies.

They threw the earth into the close-by valleys, and so accurately had the surveyors mapped out the way and arranged where brick culverts (which would ultimately drain the water under the expected embankments) and girder bridges were to be placed, that these soon sprang up at the precise spots needed.

Hundreds of navvies attacked the hillsides and conveyed the earth along the pre-arranged level until, with the aid of metals and trucks drawn by horses, they tipped the big loads and built up embankments of imposing height.

High Town Road, until then (1865) had extended much farther westerly; but, although many houses had to be demolished, the present stationmaster’s house was saved.

It was a herculean task to move the many thousands of tons of chalk to clear a way for the station and its approach road as a considerable depth had to be excavated, most from the Great Northern station. Hand labour was augmented with crowbars, and when the side of the excavation had been slightly undermined, these were driven into the earth and a mass of several tons would fall upon the present level and be cleared in trucks.

In a year or so the shorter cuttings had been made, and the adjoining small valleys filled, and so, bit by bit and length by length, the line covered culverts and bridges, and now light engines were used to convey the excavated earth larger distances.

The clearing towards Chiltern Green was a big task, but by far the biggest was the Leagrave cutting between Leagrave and Chalton. This high ground was first cut through by a small tunnel and trucks put into position under “wells” which pierced to the surface above. As the earth was disturbed there it fell into the trucks. By and by the “wells” became more like huge funnels but the scheme must have been a tremendous labour-saver, as the soil was not touched by hand.

I often walked to the nearer thrusts upon the hillside, but I was intensely interested in this Chalton section, so I made it a day’s holiday to walk there, taking my dinner in order to see this big scheme in operation. To my boyish mind, seeing the mud and the enormity of the task, it seemed simply impossible, but Mr Small, the contractor, stuck to it until, at last, the cutting was accomplished.

It may not be generally known that the bridge across the Lea at New Mill End (Chiltern Green) is part of a viaduct of several arches. For safety’s sake a number of these were later filled with earth and are now completely hidden.

A navvy called Tom, whom I had got to know, met with a serious accident from which he died later. Although he never knew it, he had a constant sympathiser and well-wishing visitor, who peeped under the window sash of his sick-room.

So well did the surveyors do their job that the present platforms at the LMS station are the maiden soil. I would that they had anticipated bigger carriages and left them a few inches higher.

As a consequence of the new line, a considerable length of the GNR had to be carried, by the aid of a retaining wall, several yards nearer the park road, so that the main line curve there should be less acute.

When, at last, the opening did take place, drivers made it a rule to blow their engine whistles to a note as nearly as they could imitate, to “cockadoodledo. Certainly something had been accomplished, and they were not slow to crow over the achievement. 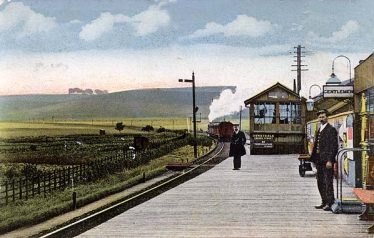 The first Midland Railway passenger train was run on July 13, 1868, and I remember that Mr John Cumberland was among the many to see the start of this historic journey. Two days later I went to Bedford by train, and distinctly recollect seeing wheat in shocks, so early was harvest that year. During the same month I applied in vain for a clerkship on the line through the medium of the company’s local electrician, Mr Litchfield.

My diary states that expresses started in October 1868 and that they numbered seven, with 19 ordinary trains. For some years trains ran between Luton and Hemel Hempstead direct, the main line was left a few score yards on the north of the new (the present) curve, so that Harpenden passengers had to change at Chiltern Green.

When the “London and Birmingham” (afterwards known as the L&NW) was partially opened in 1838, passengers had to leave the railway at the Watling Street, just north of Bletchley station, and proceed to Birmingham by stagecoaches.

When I was a commercial traveller I spent many a busman’s holiday by going into the Crewe and Carlisle stations, after business hours, to watch the traffic. Carriages were dwarfish and luggage was piled to a measured height outside.

Coaches ran upon four wheels only, so that the shaking on a journey of 100 miles was so serious that fatigue sometimes amounted to pain. There were then three classes, the 3rd was cushionless. How welcome the bogie carriages when they were introduced! The Midland were among the first to abolish second class. Warming was only possible with “foot-warmers”, utensils about 21insx8insx2.5ins, which were supplied free, full of hot water.

On one occasion our train ran from Rugby to Bletchley so fast that it gained 10 minutes upon schedule. We could hardly believe we were at Bletchley. At that station for many years an old porter attending the trains shouted:

As every compartment was a shut-up box to itself trains had to wait for several minutes at important stations for refreshments.