You are here: HomenextExhibitionsnextBuildingsnextShopsnextMr BP Shah - A Lifetime in Bury Park

Mr BP Shah came to this country with just £20.00 in his pocket yet built a thriving accountancy business and is making a significant impact upon the town. In this interview he reflects on his early days in the country and offers memories on the formative years of the Asian community in Bury Park. 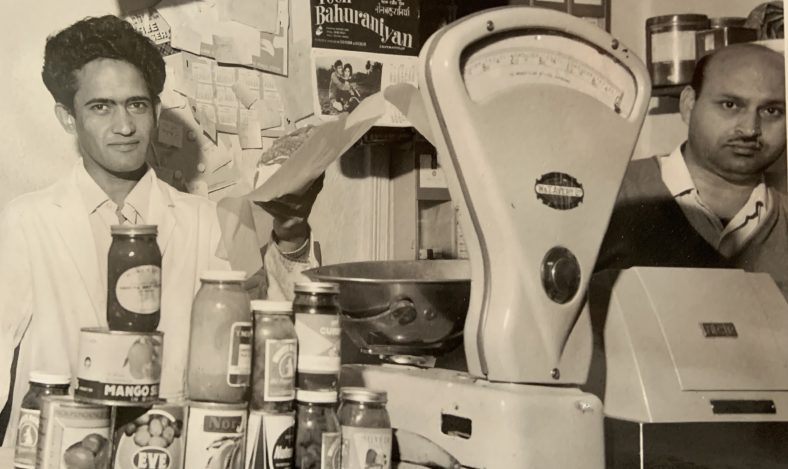 I came to Luton on a very cold December 1967 morning so I have been here for more than 50 years and over this period I have seen so many changes in the town.  For the last 40+ years I have been in Bury Park with my small Accountancy Practise and the area – Dunstable Road, Leagrave Road, Bury Park Road and all roads around have  changed so much.

I think the political situation made you leave and many people who left Kenya left because they saw pastures green in England from where they could make a better life. The pattern that we saw in Kenya would be that a husband would work, the wife would look after the family and the women did not work. Not all arrivals from Kenya were NOT business people. The business people came and had money and set up businesses more or less straight away. But for ordinary people such as myself – I came with twenty pounds in my pocket and nothing else, from day one the first priority was to find a job.  My first job was working as a labourer on the 1st of January 1968 in Brock’s Fireworks in Hemel Hempstead. My first job in Luton was in the late 1970’s as a Trainee Accountant and I then set up my BP Shah & Company Accountancy Practice in 1979.

When the Ethnic Minority came to England they came with no money, they were starting a new life and they were ambitious and England offered them the right opportunity to succeed as they were hungry for success. Initially they  would live in Rented Accommodation, save enough to buy a house. Once you bought the house you then saved towards a car and then started improving and then go on holidays. In the late 1960’s there was a lot of discrimination in almost every sector.  It was my dream to work for a bank and I applied to all the High Street Banks and got only one interview and a rejection from there.   As soon as a foreign name was seen on an Application Form, many Companies and Organisations rejected the Application.  Even if you did get to an Interview stage, there was always a reason to turn you down. Despite this you did find some nice people.  I remember I applied for a job at British Rail and I had to go to St. Pancras for an Interview and this chap picked me up to take me for the interview in his Bentley – he was an absolute gentleman and knew Indian people because he had lived in India in the Colonial Days.  I got the job but when I went to my employers at Brocks Fireworks, they would not ‘t let me go saying I was “too good” and they offered me a job as an Office Boy.

The Post Office in Dunstable Road used to be a very bustling place but now it’s only open for administrative purposes. From there, you used to come under the bridge and there used to be a public toilets where Telford Way is right now. Heading into the main shopping district there used to be a casino alongside the West Side Shopping Centre and then the Gas Works.  The Odeon Cinema – now COGIC church – and the Cycle King shop there now used to be Allied Carpets. There was also a motorbike shop called Coburn Hughes which is an Indian restaurant.

Next to the Odeon was Texas Do It Yourself right and on the opposite side was Martins Bank along long time ago that was then taken over by NatWest and finally Bank of Baroda. Most banks had outlets in Bury Park : Midland, Lloyds, the aforementioned Nat West and Barclays, which is the only one that is around now.

Nadeem’s Plaza of today used to be the Co-Op and behind there was a parade of shops with an old club called the ROAB Club. I don’t know if it’s still there, but it used to be a club where a lot of people from the West Indian community used to attend, with their exciting and very noisy (!) games of dominos. In the 60s and 70s there was a very sizeable West Indian Community and they used to be the most numerous nationality in the area. A fair number of them lived in Selbourne Road but the numbers thinned out over the years as the elders retired and went back to retire in the Caribbean.

I think the first Indian restaurant in the area was at the corner of Dunstable Road and Oak Road called the Nazma. It opened in the early 60s and catered for the Local Community.  This Restaurant also served alcohol.

In the late 1960s if you wanted authentic Indian foodstuffs there were only one or two shops in Luton who could supply.  There was Kashmir Stores in Oak Road and a Food World in Dunstable Road. In addition to this there used to be a shop on the corner of Ash Road owned by a Mr Parkar. There also used to be a Van Delivery from London on a fortnightly basis.  You placed your orders and delivery was every fortnight.

In the late 60s there were many houses in Luton that did not have bathrooms so people had to go to the Bath Centre in the town to have t heir baths.  I used to live in Newcombe Road and Ashton Road areas with no bathrooms.  My first experience was handing over One Shilling and Six Pence and for that they gave you a towel and a soap bar for 30 minutes.  There was a row of baths with a partition in between. They just used to close the door and say “half an hour starting now.”

I do not recall any Ethnic Minority Places of Worship when I came to Luton in 1967.  Now, we have places of Worship for the Hindu’s, Sikh’s and Muslims all around the Town.  There are places of Worship in Cardigan Street, Lewsey Farm and Crescent Road and a lot of Mosques all around the town.  There is also a very impressive Sikh Gurdwara being built on the corner of Dunstable Road and Dallow Road. The first Hindu Temple in Lewsey Farm was opened around 45 years ago and full credit goes to the Late Mr M M Gandhi who worked very hard for a Centre.

There was one Indian shop called Amir brothers in Oak Rd which have been there since the early 1960’s. His was the most-liked Indian shop in the town, selling ladies clothing as well as duvets or rejai as Asian people in those days did not like blankets. That closed about 10-15 years ago. Then there was Kashmir Stores in Oak Road that was a grocery shop – again one of the early ones – and then they used to be a Mr. Parkar who had a corner shop on Ash Road who ran the second grocery store.  They used to source their produce from Southall and possibly Covent Garden Market in Central London.

In the 60s if you if you had a wedding you would hire a school hall on a Saturday or Sunday. Beech Hill was one good one and Icknield was another one right along with the old Rotherham High School up London Road. There used to be music but not on the scale that  you see today. Now we have wedding venues  in Dunstable Road and Leagrave Road that can accommodate several hundred guests.

There were three cinemas: the ABC in the town centre, the Ritz in Gordon Street and another one in Dunstable. They would have two films starting at 10:00 o’clock on a Sunday morning running to 3:00 o’clock. Some Asian people brought Indian Films and had contacts with the cinema people so that two films could be shown. Alternatively, a lot of people went to Southall to see movies starting about 11:00 o’clock at night and come back home 3/4 o’clock in the morning.

Luton today is a very changed Town to that of 50 years ago.  Almost all the shops in Dunstable Road, Leagrave Road, Bury Park Road and surrounding roads are owned by ethnic minority Communities.  There are lot of Grocery Shops, Fast Food Outlets and Restaurants catering mostly for the Ethnic Minority Community.  In addition to this there are a lot of Retail Outlets.  There are Carpet and Furniture Shops, Clothing Shops, Second Hand Tyre Shops, MOT Centres and Motor Repair Workshops.  The whole of the area known as Bury Park is a thriving area and attracts a lot of people from outside especially at the weekends.