You are here: HomenextExhibitionsnextBuildingsnextShopsnextDavis Butchers of Park Street

I began researching my family tree some years ago, after seeing “Who do you think you are” on TV. Although this article is about Davis Butchers shop, it focuses on my great-great-grandfather, Harry Buckley. 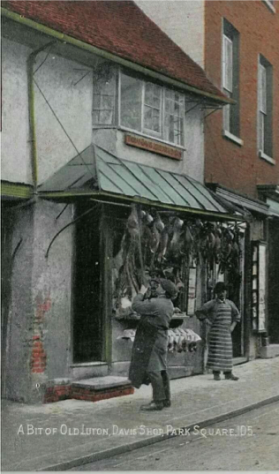 I first became aware of Harry Buckley on a cold Remembrance Sunday morning in about 1996, when my father was telling me about my heritage. Tales from various members of the family, all praising his skills as being very accomplished in the butcher trade.

The family story goes that he would collect a chicken from the back yard, and after he had dispatched it and plucked it, he would have to continue to hold onto it as it would still be able to run around the shop.

Born in 1865, he was taken on at Davis Butchers around 1880 and continued there as a butchers assistant until around 1914. Many Pictures feature my great-great-grandfather alongside Mr Davis, often in a bowler hat and with the most flamboyant moustache.

Davis Butchers was originally located at the very top of Park Street, just prior to Market Hill. The site now is occupied by Off The Wall (formally Yates). From various pictures, it was a hive of activity. The building itself would have probably been considered rather old when my great-great-grandfather began working there in about 1881. It was by far the oldest building in the parade, probably being built around the 15th century. Many of the 19th century images show an illustrious array of poultry hung outside the shop, attracting many an onlooker. (a Health and Safety nightmare no doubt by today’s standards!) 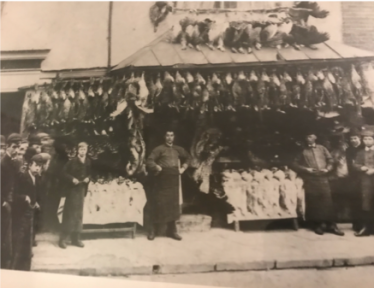 Unlike today, many building were used until it was physically impossible for them to be repaired. Judging by some of the later pictures (taken around 1910), the butchers was no exception, as a lot of dilapidation is apparent, from broken slates along the canopy and more sadly the lack of poultry, hanging from the outside. As part of a town wide modernisation scheme, the site was demolished around 1914, just prior to the commencement of the First World War.

Post closure and demolition, Tommy Davis moved to a shop on Church Street. Harry Buckley would have been about 49 years old by this point  and unfortunately my research into his later life is still on-going. Family stories suggested he prepared game at home in Slip End for the Ludlows  at Luton Hoo, where his wife (my great-great-grandmother) worked, until his early death around 1930. Hopefully in the not too distant future I can update you on my progress.