You are here: HomenextExhibitionsnextBuildingsnextCinemasnextA Little Bit About the Beatles in My Home Town…

A Little Bit About the Beatles in My Home Town…

Recently I have renewed my interested in local history and have been finding out a lot about my home town of Luton. Researching various aspects of it can lead down lots of interesting roads. Learning about an old building called the Majestic Ballroom led me to an interesting link between Luton and another interest of mine – the Fab Four. 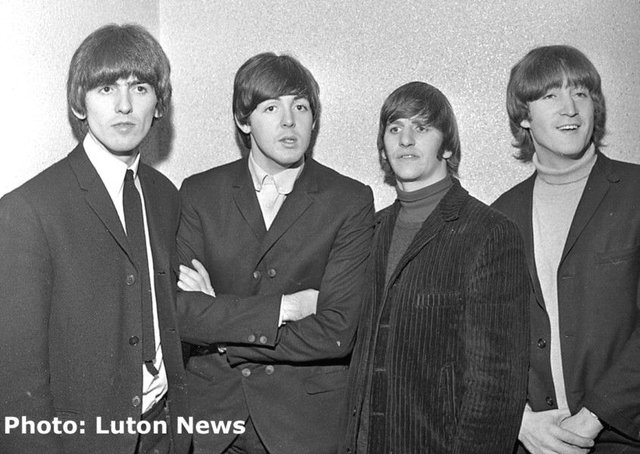 The Beatles at the Majestic Ballroom

Originally the Palace Theatre, the building was opened as a live theatre in 1912. In 1949 it was renamed the Gaumont, which closed on 1961 and was converted into the Majestic Ballroom, operated by Top Rank.

It was at the Majestic Ballroom in Mill Street on 17th April 1963 that the Beatles first played in Luton. What is interesting about this concert is that it took place just weeks after the release of the Beatles’ first album, “Please Please Me”, so they were relative unknowns. In fact, a visit to Luton Central Library to scan the local newspapers did not yield any articles on this event! The set list is not the list of hits that you read about once they were huge stars but is reminiscent of the early “Beatles at the BBC” recordings:

I saw her standing there
A shot of rhythm and blues
Do you want to know a secret?
Beautiful dreamer
Anna (Go to him)
Thank you girl
If you gotta make a fool of somebody
Sweet little sixteen
From me to you
Long Tall Sally

Returning to Luton at the Odeon 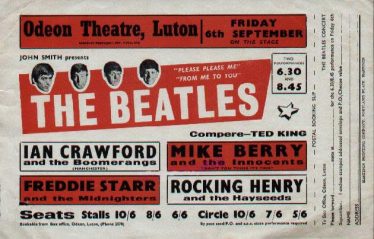 Ticket to The Beatles concert at the Odeon Theatre

The Fab four returned to Luton just 5 months later and by this time they were national if not yet international stars. In August the local press mentioned that a local men’s outfitters had a display of Beatle jackets, taking up a quarter of its storage space. In September it was reported that the event at the Odeon in Dunstable Road on the 6th brought out more teenagers than had previously been seen together at any one time and that the show was drowned out by persistent screaming.

Paul Griggs noted in his book “Diary of a Musician” that there were no curtains, so the Beatles just ran onstage and the PA system consisted of just two small speakers. Furthermore, a special stage was reportedly installed. The set list included their latest hit, “She loves you”.  Local fans caught them on the cusp of superstardom.

Final appearance at the Ritz Cinema 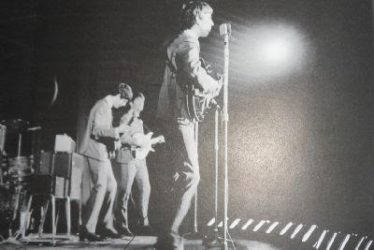 The Beatles on the stage

By 1964 the Beatles were international stars and their final appearance in Luton, playing 2 shows (6.30pm and 8.45pm) at the Ritz cinema  in Gordon Street on 4th November 1964, was a huge event. Again, screaming featured heavily and the set list featured several songs from “A Hard Day’s Night”. As well as the title song, fans were treated to “If I fell”, “I should have known Better” and “I’m happy just to dance with you”.

On this occasion the Luton News were given backstage access to the Beatles, who posed for a photo with the mayor and mayoress and two children, Stephen Elson and Stephen Atkinson and signed Luton Borough Council’s visitors book. I was recently given the privilege of viewing these first hand and was allowed to photograph them. Although all but one of the aforementioned buildings have now gone, Fab for history was made in our local streets.